Phase 3 Data on CCH for Cellulite 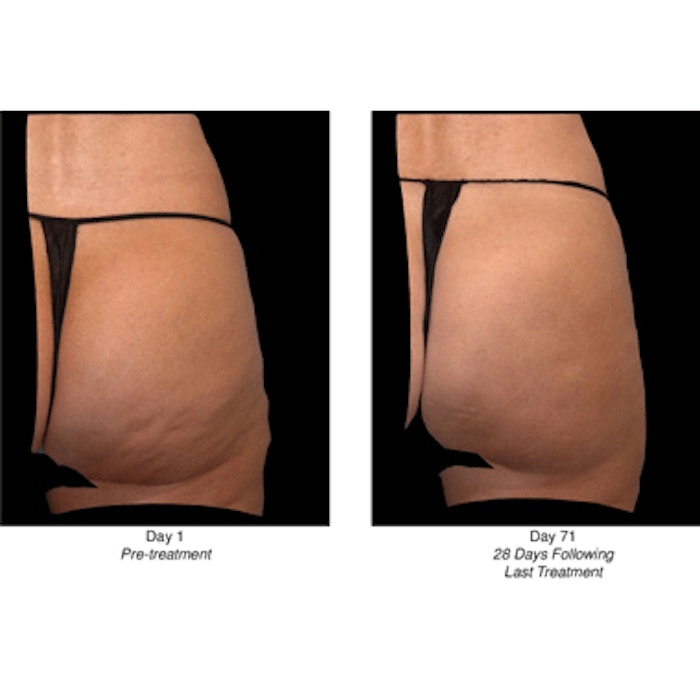 Endo International announced positive results from two Phase 3 RELEASE studies of collagenase clostridium histolyticum (CCH) for the treatment of cellulite in the buttocks. Subjects receiving CCH showed highly statistically significant levels of improvement in the appearance of cellulite with treatment, as measured by the trial's primary endpoint, which was at least a two-level composite improvement in cellulite severity in the target buttock at Day 71. In addition, RELEASE-1 passed eight out of eight key secondary endpoints and RELEASE-2 passed seven out of eight key secondary endpoints.

RELEASE-1 and RELEASE-2 were identical, multicenter, randomized, double-blind, placebo-controlled studies that enrolled 845 women (423 and 422 in each separate trial) 18 years or older with moderate-to-severe cellulite. Each subject received up to three treatments of CCH (0.84mg/treatment area) or placebo spaced approximately 21 days apart. Up to twelve injections were administered during each session across each treatment area—left and right buttock. Patient and clinician used two validated photonumeric cellulite severity scales developed by Endo and third-party psychometric experts to assess cellulite severity at baseline and after each treatment.

In RELEASE-1, 7.6 percent of subjects receiving CCH demonstrated a highly significant (two level or greater) improvement in the composite investigator and patient assessments of the appearance of cellulite at Day 71, compared to only 1.9 percent of placebo subjects.

In RELEASE-2, 5.6 percent of subjects receiving CCH demonstrated a highly significant (two level or greater) improvement in the composite investigator and patient assessments of the appearance of cellulite at Day 71, compared to only 0.5 percent of placebo subjects.

“The Phase 3 results are positive for patients and consistent with previous data that demonstrate CCH has the potential to be a breakthrough treatment for cellulite, a condition that millions of women experience but for which there are currently limited effective treatment options,” said Joely Kaufman-Janette, M.D., a board certified dermatologist at Skin Associates of South Florida and CCH clinical trial investigator. “Many of my patients have expressed that they are self-conscious about their cellulite and looking for something to effectively treat it. The fact that CCH is a potential new injectable option to treat cellulite will be very meaningful for my patients and for the aesthetics industry overall.

Image: Before and 71 days after last CCH treatment.