As interest in autologous cosmetic procedures soars, physicians zero in on the most promising offerings. 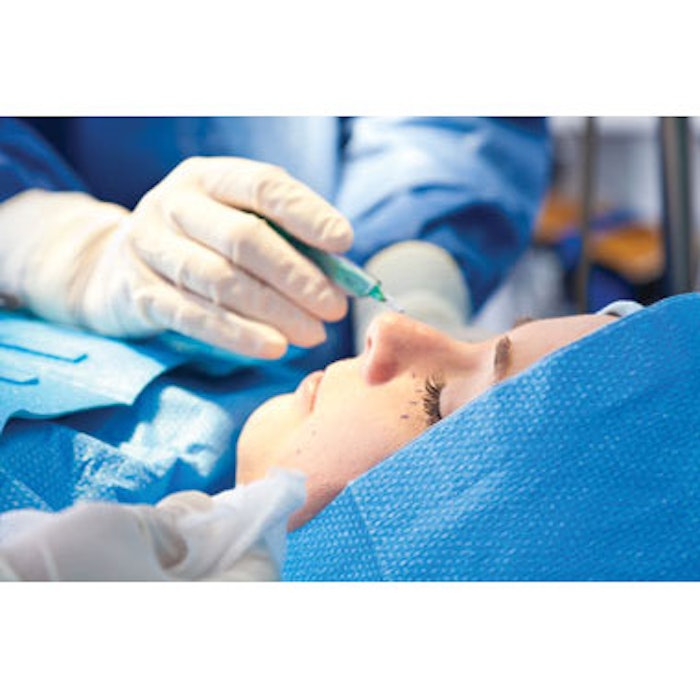 For many patients, the idea of using their own biological materials to rejuvenate their skin and bodies is enticing. These procedures present a more natural alternative to dermal fillers and implants while promising longer-lasting results. But are patients really buying? And do these procedures truly offer comparable results to existing modalities? We spoke with plastic surgeons and dermatologists about some of the most highly publicized biological products and procedures to determine where—and if—they are finding a lasting place in medical aesthetics practices.

There has been significant debate about optimal harvesting techniques. Some doctors advocate centrifuge, others prefer gravity separation or rolling the fat on cotton gauze to separate out oils and blood cells. Today, physicians are finding that harvesting technique takes a back seat to proper injection in achieving lasting results.

“All of these harvesting methods have been studied, and there hasn’t been anything consistent showing that one method is better than the other, which leads one to think that how you separate the fat isn’t an essential matter of importance,” says cosmetic and reconstructive surgeon Val Lambros, MD, FACS, who has been performing fat transfer for more than 20 years.

The challenge with facial fat injection is that the patients who benefit the most tend to be the patients who need volume least. “Fat is a great tool when used appropriately, but you have to have a high tolerance for ambiguity,” says Dr. Lambros. “If you’ve got a chubby young face and you’re putting fat in, it works great. If you’ve got an older, fat-depleted face, it’s not as reliable and that’s a major issue: the age of the patient.”

Some areas of the face that can benefit from fat transfer include the brows, temples, cheeks and jaw line. “These are the prime targets for fat in my practice,” says Dr. Lambros.

One area he cautions against the use of fat is in the lower eyelid. “You have to be extraordinarily careful there,” he says. “Even people who have lots of experience with fat transfer see problems with lumps and bumps in the lower eyelid, and it’s hard to get rid of. You can make it better, but you can’t go back to where you were—at least not with current technologies.”

The best solutions for poor fat grafting outcomes include liposuction or surgery—neither of which is ideal for the undereye area, particularly because the fat is typically grafted into all the tissue planes. “A heat-based or ultrasound-based device might come along to help these patients,” says Dr. Lambros. “But it is an issue—there are thousands of patients out there who’ve had fat grafting to the lower eyelid, and it’s really hard to do much for them.”

Image courtesy of Steve Debenport/Getty Images
[pagebreak]
Other concerns with fat grafting involve the risk of overcorrection and future weight gain. “Excess with anything isn’t good,” says Dr. Lambros. “If you’re excessive with a facelift, the patient can look pulled. If you’re excessive with liposuction, the patient looks irregular. If you’re excessive with fat, you can turn a young, defined face into the Pillsbury Doughboy. The skin is smooth with no wrinkles, but it looks bizarre.” In addition, young patients who receive fat transfer may struggle with changes in the appearance of the fat as they gain weight in later years. “I predict there’s going to be a tidal wave of problems in a few years as patients who are getting a lot of fat in their faces now get a bit older and put on weight,” says Dr. Lambros.

Oculoplastic surgeon Frederic Stern, MD, FACS, who often uses fat transfer in place of dermal fillers, notes that the key to avoiding poor outcomes is gradual enhancement. “The goal is to do a gradual buildup of the area,” he says. “You do see an effect immediately, but you don’t want to give 100% correction with just one injection of autologous fat, or it won’t take. This is very different from dermal fillers where you want to achieve the effect all at once.”

Aftercare also plays a role. “Immobilization is a good thing,” says Dr. Lambros. “You try to keep the face as quiet as you can, because motion disrupts the tiny blood vessels that are growing into the fat.”

Dr. Lambros prefers to reserve facial fat transfer for his facelift patients. “Most of the patients are older, so the fat is less likely to grow with weight gain,” he says. “Also, the patient is already anesthetized, and you can take out as much fat as you want.”

For his office patients, Dr. Lambros recommends fillers like Juvederm and Restylane for lines and wrinkles, and VOLUMA XC for volume. “Voluma has proven to be great for cheek bones; I love the stuff,” he says.

One advancement that may make fat transfer a more viable option for long-term filler patients who want permanent improvement—but do not plan to undergo facelift or liposuction—is cryopreservation of fat. This technique allows the physician to harvest fat once and preserve it for future injections, which are offered over the course of several months.

Dr. Stern has found that offering a one-time “mini-lipo” harvesting procedure with cryopreservation is an attractive option for patients interested in replacing dermal fillers with fat transfer.

“If you look at patients who have had fat transfer versus fillers, the patients getting autologous fat injections look better,” he says. “They’re not just filled, the appearance of the skin is improved. It looks healthier, as if they’re building their own collagen.”

Though there is an initial fee for harvesting and storage costs, Dr. Stern points to a “break even” point—patients who get a couple of syringes of filler, twice a year over a two-year time period or more will save money with fat transfer. In his practice, liposuction patients pay a $250 processing fee to set aside 100mL to 200mL of fat for storage. The patient pays an additional fee of about $750 to companies, like American CryoStem—used by Dr. Stern—for processing and storage for six months. “After that, the additional cost of storage is about $200 per year,” says Dr. Stern.
[pagebreak]
In his practice, patients who come in for fat harvesting and storage only pay approximately $2,000 for the mini-lipo harvesting procedure—performed using a hand syringe—and the first injection, which is performed on the day of the extraction. The next injection is scheduled for three to four months later. Additional injections can be scheduled, as needed, within a similar time frame.

“Injection technique is very important,” says Dr. Stern. “It’s a slightly higher learning curve than a facial filler, because you want to layer the fat and not inject large amounts at once.”

The slow progress of autologous injections is a key consideration in patient selection. Some patients are happy to take their time to achieve long-lasting and more natural results using their own biological materials. But others will become discouraged with the slower progress and need for multiple injections.

This has been a key deterrent for another autologous filler that has struggled to find its place in medical aesthetics. “LaViv is an autologous fibroblast injection, so it works best when it’s injected into the dermis,” says dermatologist Mary Lupo, MD, of the Lupo Center for Aesthetic & General Dermatology. “As such, it’s very different from HA fillers and even Radiesse. People need to know that it’s not so much for wrinkles and folds as it is for fine retexturizing of the skin. It’s most useful for acne scars and probably for some sort of wound-healing technology down the road.”

The challenge for physicians, according to Dr. Lupo, is selling the procedure to patients. “It’s prohibitively expensive,” she says. “When you look at what they’re doing with the technology, it’s quite amazing. The problem is, there are other, less expensive procedures that can give improvement in these conditions, whether it be fractional CO2 or fractional nonablative resurfacing for acne scars and finer lines; Sculptra, which does improve skin texture and tone; or fillers for wrinkles and rolling acne scars.”

The cost to the physician is about $12,000, and it has some distinct diferences when compared to fat and HA dermal fillers. “It takes about three months to get the material back after biopsy, and you have to get it all orchestrated because of the refrigeration and sterilization regulations,” says Dr. Lupo. “It doesn’t require any special equipment on the part of the doctor, but the material has to be injected within a couple hours after delivery—the timing is what makes it very difficult for practices.”

Patients receive three injections and get gradual improvement as their bodies’ collagen and elastin production is stimulated. “It’s a hard sell because it doesn’t give the ‘wow’ that some of our other treatments do, like a CO2, aggressive Fraxel Dual or three vials of Voluma,” says Dr. Lupo.
[pagebreak]

“There are three different products—a serum, which contains a 10% concentration of cytokines; an eye cream with 2.5%; and a moisturizer that contains 5%,” says Dr. Stern, who is a member of the company’s scientific and medical board. To create the products, the patient undergoes fat harvesting at the physician’s practice, then the fat is sent to the Personal Cell Sciences lab where stem cells are isolated from the fat, grown in culture, multiplied and stimulated to produce their own cytokines. The entire process takes four to six weeks.

Dr. Stern performed a split-face clinical study on the products. Patients used their own daily skincare products on one side of the face and U Autologous Eye Cream on the other for eight weeks. “We did baseline readings using Canfield’s Visia system and I also did biopsies of the skin at baseline and eight weeks,” he says. “There was an average 26% improvement by Visia analysis in wrinkle scale, pigmentation and solar damage as well as a reduction in redness and broken capillaries. The biopsies showed a significant stimulation of elastin as well.”

The cost for the products is $260 for the eye cream and up to $540 for the firming serum. Patients can purchase the full line for $1,200 plus the initial cost of harvesting. “My patients who tend to buy the more expensive, higher end products are the most interested, because the costs aren’t that different from what they’re used to spending on skin care,” says Dr. Stern. “And they have the added benefit of banking their fat and stem cells for future use.”

Looking at both the current and potential future uses of fat and stem cells, Dr. Stern sees a win-win for cryopreservation. “So many people are interested in fat transfer today, so to me it’s a no-brainer for someone to put aside an extra 100cc to 200cc of fat for a patient who is already having liposuction,” he says. “Then the patient has the option of future fat transfer, stem cell banking and a personalized skincare line. We always give our patients the option, and a significant portion of them opt to do this even if they’re not currently considering fat injections or the U Autologous line. It’s a nice option to offer.”