Off With the Old

Laser, peel or microdermabrasion? How to select the right resurfacing treatment for your patients. 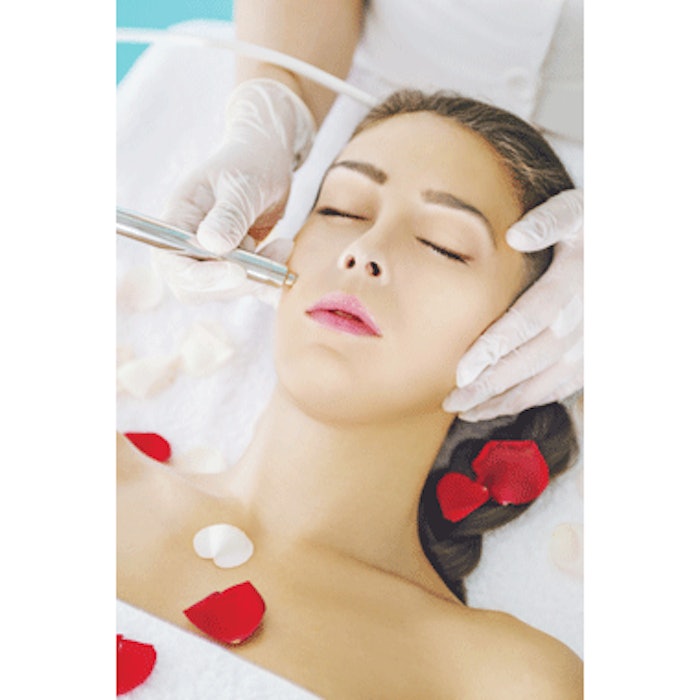 Removing the top, damaged layers of the epidermis to reveal smoother skin and stimulate the production of collagen is a time-tested rejuvenation procedure recommended by skincare professionals worldwide. But which skin resurfacing procedure is right for which patient? While chemical peels date back to the days of Cleopatra, who is rumored to have bathed in sour milk to keep her complexion youthful, they have since been joined by dermabrasion, microdermabrasion and laser skin resurfacing. There are a number of strategies available to help practitioners select the right procedure for each patient’s skin type, concern, tolerance for downtime and budget.

For many years, medium-to-deep chemical peels and dermabrasion were the treatments of choice for patients with deep wrinkles and those with acne scarring. Today, these modalities have largely—though not entirely—been replaced by fractional laser skin resurfacing. “Factoring in my training, I have historically done Jessner peels and really deep peels. The problem with medium and deep peels is that the control is all in the person’s hand and how much is applied,” says Jennifer Reichel, MD, owner and director of the Pacific Dermatology & Cosmetic Center in Seattle. “As opposed to lasers where, if you pick a setting, you know that you’re going to get an even treatment across the entire surface. So when you get into that deeper resurfacing, I tend to move toward lasers because they’re safer.”

For patients with severe photodamage, including deep wrinkles, and significant actinic keratoses (AKs) and dyschromia, Bruce Katz, MD, owner and director of JUVA Skin & Laser Center in New York, also opts for fractional CO2 resurfacing. If the patient can tolerate significant downtime of 7 to 10 days, he performs a single, higher-density treatment. But more commonly, he treats patients with multiple sessions delivered at lower energy and density settings. “Here in New York, most of our patients are not interested in significant downtime,” he says. “I might do four or five sessions of fractional CO2 at low density and low energy, performed at two- to three-week intervals. People get significant benefits without the downtime.”

Suzan Obagi, MD, director of the Cosmetic Surgery and Skin Health Center at the University of Pittsburgh Medical Center, performs both fractional laser skin resurfacing and medium depth chemical peels. Speaking at the 31st Annual Meeting of the American Academy of Cosmetic Surgery, she noted that the patient’s skin color, skin thickness, depth of the skin problem, tolerance for downtime and number of treatment sessions all factor into her treatment recommendations.

If she is trying to reach the deep dermis, “I may lose control of the peel, so I may choose a laser for this patient,” she says. In the case of patients with lighter skin types and significant melasma, she tends to recommend chemical peels. “I do not want to generate heat for this patient, so I would likely choose a peel,” she says.

She notes that patients with thicker skin are harder to peel and may, therefore, be better candidates for laser resurfacing. In some cases, Dr. Obagi combines fractional ablative resurfacing with chemical peels. “You can’t laser everywhere, for example on the neck and the eyebrows,” she notes. “I may resurface with the laser and then use a chemical peel to ‘feather’ around the eyes, brows, neck and hairline to avoid lines of demarcation.”

Patients with darker skin types can experience post-inflammatory hyperpigmentation (PIH) following both laser skin resurfacing and deeper chemical peels. “A lot of people have darker skin tones, and you have to be very careful with the heat from the laser, so that’s not always a proper treatment for those patients,” says Andrea Fairman, a licensed esthetician with Colorado Plastic Surgery Center in Littleton, Colorado. “The same can be true of peels, but with a lot of the newer peel formulations you can be very safe with the darker skin tones and still offer a fairly aggressive peel.”

You can reduce the risk of PIH by prepping the skin. “There are some peels out there that are safe for skin types IV and V. However, depending on the peel, it’s wise to pretreat and strengthen the patient’s skin, and get them on pigment inhibitors to suppress the melanocytes,” says Fairman. “Ultimately, they’re going to get better results if they’re prepping their skin, because the skin is in better condition, and it does reduce the risk of side effects.”

Image copyright Getty Images.
[pagebreak]
For patients with darker skin tones and acne scarring, which requires deep resurfacing, Dr. Obagi pretreats the skin with retinoids and bleaching agents. She then offers a combination treatment of fractional CO2 resurfacing and chemical peels, using the peel after the laser procedure to help blend the treated area.

Because patients with acne scarring require multiple treatments, Dr. Reichel recommends nonablative fractional laser resurfacing to her patients. “I had five patients who came in with acne scarring, and we tried a series of four fractional CO2 treatments. None of them got through more than two, because it’s so difficult to heal from,” she says. “Whereas with the nonablative Fraxel Re:store, you’re healed in three or four days. People will undergo six to eight of those treatments, and it gives them a better result than one CO2.”

A relatively new option for acne scarring is the 755nm Picosure (Cynosure) picosecond laser. “For acne scarring, there’s a new type of laser we’re using, which is the
Picosure, and that’s been very nice and has minimal downtime,” says Dr. Katz.

Though Dr. Reichel and Dr. Katz prefer lasers for deeper resurfacing needs, they both agree that chemical peels continue to offer valuable benefits for superficial resurfacing in patients with fine lines and minor photodamage. “I use chemical peels a lot,” says Dr. Reichel. “They’re really great in a younger population or in an older population as a maintenance treatment.” When used as maintenance between ablative laser resurfacing procedures, she has patients wait at least three months before beginning the peels. “It will keep the skin looking fresh, and it’s a nice way to maintain the rejuvenation you receive from the bigger guns,” she says.

The variety of peeling agents and combination peels available today make them a popular and effective choice for a wide range of patients, notes Marc Edward Weiner, licensed esthetician and owner of Marc Edward Skincare in West Hollywood, California. “Chemical peels are going to be effective for pigmentation, pores and acne, and they will reduce fine lines,” he says. “There are even some chemical peels that will help reduce redness and, because rosacea can be caused by Demodex mites, chemical peels can reduce the mites in the follicles, which can reduce the redness of rosacea.” Two concerns that cannot be addressed by superficial peels are acne scarring and broken capillaries. “I have never seen a peel improve capillaries—that’s going to be a laser treatment,” says Weiner. “And lasers are much more effective for deep acne scarring.”

Dr. Katz also finds superficial peels helpful for off-the-face indications. “Some women begin to develop fine lines in the cleavage area, we do light chemical peels there, though I still think fractional resurfacing works better,” he says. “But some people prefer a chemical peel. Particularly here in the East during the winter, people begin to look sallow, so they come in for a few superficial chemical peels to liven up their skin and make them look more flushed and glowing. It’s a nice little pick-me-up. It’s also a nice pampering experience.”

Chemical peels, particularly glycolic and salicylic acid peels, are effective treatments for active acne. Dr. Katz finds that, in addition to helping reduce acne outbreaks, these peels can also reduce hyperpigmentation. “Acne patients typically get post-inflammatory hyperpigmentation—or dark spots—from the acne, particularly patients with darker skin,” he says. “These superficial peels will help not only the acne but also the discoloration. So superficial peels do have a role in acne as well.”

Though you want to provide the most effective treatments to your patients, the high cost of lasers and the relatively modest cost of chemical peels must be considered as well. “TCA peels are fantastic. I tell people, ‘Before you get an expensive laser treatment, try doing some low or medium chemical exfoliation—you can get great results and that may be enough,’” says Weiner.

Dr. Reichel also considers her patients’ budgets and tolerance for downtime when discussing treatment options. “The bigger the procedure, the more costly it is. I have done multiple chemical peels on patients over a two- to three-year period of time when, if they could have afforded it, I probably would have chosen a series of nonablative fractional treatments. But the cost was so discrepant,” she says. “So I may change my recommendation based on factors outside of ‘This is what’s perfect for your concerns.’ Namely, budget and tolerance for downtime.”

A third resurfacing option for medical aesthetic patients is microdermabrasion. The typically gentle treatment exfoliates the top layers of the epidermis and also helps to stimulate circulation. “We find that microdermabrasion is quite helpful in improving the texture of the skin,” says Dr. Katz. “A lot of women will have a very nice glow after microdermabrasion. We also find it helpful for comedonal acne, where the person has a lot of blackheads and whiteheads.”

Fairman uses microdermabrasion prior to chemical peels as well, but with some cautions. “I would not use microderm on anyone who has significant acne because you can spread the bacteria,” she says. “If the patient has significant signs of rosacea in the skin, I would not choose microderm because of the risk of flare up. If the patient states that their level of discomfort is high and they show signs of redness as soon as you start the microdermabrasion, that’s a very good indication that this patient is not going to tolerate a peel on top of a microderm. You’re better off choosing a lighter lactic acid peel, seeing how they do and then having them return for a more aggressive peel.”

She also performs microdermabrasion as a standalone procedure to fine-tune the skin. “Microdermabrasion alone can be satisfactory for people who want to get a little brighter, as long as they have strong capillaries and don’t have any visible vessels,” says Fairman.

Low-level light therapy is a proven, effective, and safe treatment for hair loss, which impacts both men and women. The Celluma RESTORE is a non-invasive, non-toxic option for clinical and at-home use.
Oct 5th, 2021
Events