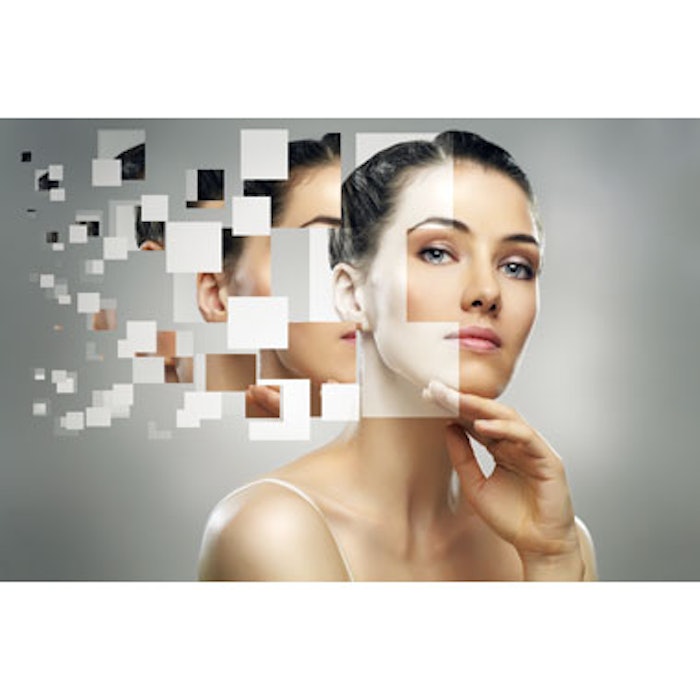 Skin proteins—keratin, melanin, collagen, elastin, gelatin—give structure to cells, transmit signals from the cell surface to the organelles and mitochondria, and control the regeneration of tissues. Peptides—which are protein fragments—are popular active ingredients in skincare formulations, where they are used to affect the behavior of skin cells.

“Peptides are protein fragments—short chains of amino acids. About 50 or fewer amino acids in a chain is a peptide; about 50 or more is a protein. This is relevant because certain cells can be signaled to make more of a protein by ‘seeing’ a fragment of that protein,” says John Kulesza, president of skincare company Young Pharmaceuticals.

He likens the process to a game of Name That Tune, where to win you must name the song in as few notes as possible. “The smaller the number of amino acids in the peptide chain, the better its chances of penetration. Of course, to be effective it also has to include enough amino acids to convey a message to the cell,” he says.

The use of peptides in topical formulations is based largely on in vitro research. “While the broad class of peptides work extremely well in vitro under laboratory conditions, when incorporated into product formulas, they sometimes work and oftentimes they don’t,” says Robert P. Manzo, president and CEO of skincare manufacturer Skinprint. “This is what leads to skepticism about peptides in general.”

How well a peptide works in vivo depends on three factors—dose, delivery and depth—he explains: “It is critical that the dose be correct, that the peptides be able to penetrate the skin barrier and reach the proper depth within the skin to be effective. The function of the peptide determines the depth we want it to reach, which then defines the delivery mechanism. Once we understand a peptide’s mechanism of action, we can properly calculate dose, giving the peptide optimal bioavailability to initiate the skin reaction we want.”

Peptide penetration is complicated by several factors. “Although many peptides are smaller than 500 Daltons, which means they could readily pass through the skin barrier, others are not,” says Neal Kitchen, executive vice president of strategy and development at Hydro­Peptide. “More problematic—all are naturally hydrophilic, which means they resist going though the lipophilic barrier layer of the epidermis.”

Fortunately, there are a number of ways to modify peptides to improve skin penetration. “For example, they can be modified with a fatty acid (e.g., palmitoylation or myristoylation) or an acetyl group (e.g., acetylation) that significantly improves their ability to penetrate the lipid layer of the skin,” says Kitchen. “Protein extracts have also improved penetration via hydrolysis. A peptide solution should be designed with ingredients that stabilize the solution and help to condition the skin for peptide penetration.”

“I would say effectiveness depends a great deal on where the peptide is to be used,” says Kulesza. “Peptides tend to be most effective in areas where the skin barrier is thinner, such as under the eyes and on the neck and chest.”

Calculating how much of a peptide to include is a bigger issue. “We often don’t know enough about how the peptide works to calculate how much we need to include,” says Manzo.

One strategy skincare formulators use to increase the efficacy of peptides is to include several different peptides in a single formulation. This may include combining multiple peptides that address similar concerns but through different pathways, or combining peptides with other peptides to improve penetration.

Photo copyright Getty Images.
[pagebreak]
“The great thing about peptides is their potential for countless sequences as well as combinatorial approaches to make solutions better,” says Kitchen. “Through the years, there are several examples of peptide sequences that have been slightly modified from the original sequence to improve their specific effects. For example, adding palmitoyl to tripeptide-1 (Pal-GHK) improved its skin penetration. Acetyl octapeptide-3 is an elongated version of Argireline hexapeptide that is shown to be 30% more effective. We have used over a decade of research and experience to understand how to combine multiple peptides together to properly trigger and amplify the body’s own repair system to increase hydration, reduce visible lines and wrinkles, and enhance the skin’s natural luminosity. Whether it is next generation peptides or peptides with new activities, it is important we continue to discover new ways to utilize these antiaging tools.”

Tatiana Kononov, director of research and development at Revision Skincare notes that, despite the challenges in formulation, peptides have become popular because they offer multiple benefits to skincare formulators. “They have direct mechanisms of action and they perform unique functions with minimal side effects,” she says. “With no color or odor issues they also allow for aesthetically pleasing products.”

Peptides are categorized by how they function in the skin. Most of the peptides now being marketed for skin care fall into one of three categories: neurotransmitter-inhibitor peptides, signaling peptides and carrier peptides.

The best known of these is Argireline (acetyl hexapeptide-8, formerly known as acetyl hexapeptide-3, Lipotec). “Argireline mimics the N-terminal end of SNAP-25, which is one of the three proteins in the SNARE complex needed for muscles to contract. As a result it decreases the ability of facial muscles to contract,” says Dr. Graf. “In addition, it decreases certain catecholamines (adrenaline and noradrenalin) which increase muscle contraction.”

Elliot Entis, founder and CEO of LIFTLAB Skin Regeneration, notes that Argireline is widely used and its efficacy is supported by studies published in the Journal of Cosmetic Science. “With that being said, larger scale studies have not been conducted. The use level of this ingredient that was tested by the manufacturer (at 10%) is very high in terms of typical cosmetic use levels. It is doubtful that many of the products on the market using this ingredient are actually using the tested level,” he says.

Kulesza agrees, adding, “Its target is the neuromuscular junction, which is really deep, beneath the dermis. It is not clear how well this molecule can reach that depth.”

Signaling peptides or messenger peptides. “Signaling peptides are designed to either stimulate or suppress the activity of a cell signaling pathway. For example, palmitoyl tripeptide-5 (Syn-Coll, Centerchem) mimics the activity of a protein called thrombospondin (TSP) to convert TGF-ß from its inactive form to its active form. Activated TGF-ß stimulates collagen synthesis while also suppressing stress-induced collagen degradation from metalloproteinases and cytokines,” says Kitchen.

Probably the best known signaling peptide is Matrixyl, which “mimics procollagen (the precursor of collagen) and in doing so ‘fools’ the skin into producing more collagen, which results in wrinkle reduction,” says Dr. Graf. “It has been tested in many studies and has been active at concentrations between 2% and 8%, with 8% being the most effective.”

“It is tops in terms of quality of data from many studies,” says Kulesza. “Croda developed Matrixyl for Proctor and Gamble. P&G has excellent scientific studies posted on its website. One study compares Matrixyl to retinol and suggests that it has the efficacy of around 0.03% retinol and is not irritating. Of course, 0.03% retinol would not be irritating either. In my opinion no peptide available for cosmetic use has the power of retinoids.”

Matrixyl 3000 (Sederma) is similar to Matrixyl but includes additional peptides and can be used by formulators other than P&G. “Matrixyl 3000 is a matrikine, which refers to fragmented matrix peptides able to regulate cell activity,” explains Dr. Graf. “It contains two matrikines, Pal-GHK and Pal-GQPR, which decrease the expression of SA-beta-galactosidase and progerin, two markers of cellular senescence. They also stimulate dermal proteins.”

Carrier peptides play a key role in delivering nutrients, essential metals, and even other peptides and proteins to the skin. “For example, copper is an important cofactor in collagen synthesis that down-regulates MMPs,” says Kitchen. “The well-known tripeptide GHK helps facilitate copper uptake to the skin.”

GHK-Cu is well studied for wound healing and has been used in cosmetics since the early 1980s. Many recent studies demonstrate its efficacy at reducing inflammation and facilitating skin remodeling. An article in the January 2012 issue of Journal of Aging Research and Clinical Practice reviews these studies.

Before a peptide makes its way into a skincare formulation, it undergoes a great deal of in vitro and in vivo testing, says Dr. Graf. “Various concentrations of the peptide must be used to find the most effective level and, most important, to find the best way to deliver the peptide formulation into the skin. Prior to any cosmetic use, synthetic peptides must be tested extensively for safety. It’s a very slow process.”

What is missing, says Entis, is large scale clinical trials. But that is nothing new when it comes to skincare products. Only a handful of products can provide large, independent clinical studies. Physicians recommending skin care are left to consider the basic science and the reliability of the formulators involved.