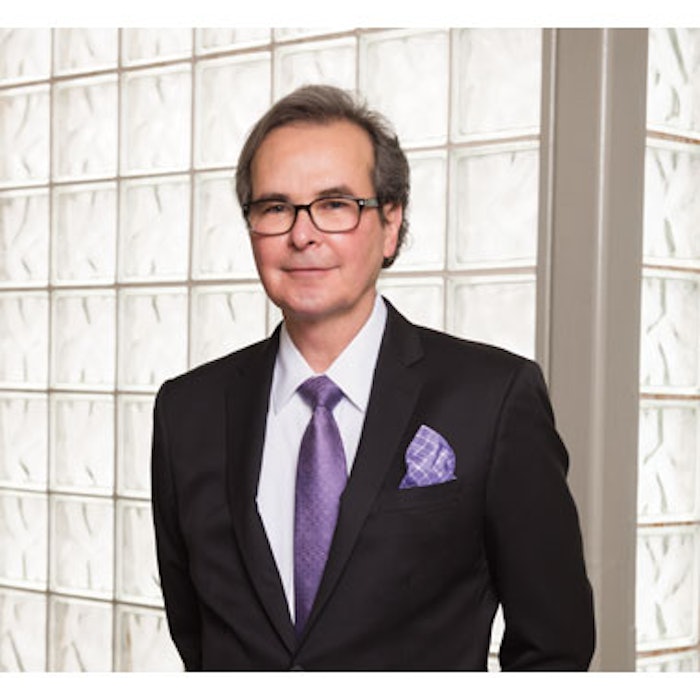 They say that one's character is shaped by the people and experiences one faces as a child, so it’s not surprising to anyone who knew the young Robert A. Weiss, MD, that he chose a profession aimed at helping people and easing suffering.

The prestigious Baltimore-based dermatologist and dermatologic researcher was raised in Forest Hills, New York, by his mother and father, who was a Holocaust survivor. “He would show me pictures and tell me about forced marches where the Nazis would kick Jews and just beat them—if the older men couldn’t keep up with the forced march, they would beat them to death right there,” says Dr. Weiss. “Hearing those stories of human cruelty made me decide, I’m going to do the opposite. I’m going to help people.”

Dr. Weiss became the first member of his family to pursue higher education, graduating from Columbia University and then the Johns Hopkins University School of Medicine in 1978.

“You get exposed to everything in med school. Of all the different rotations, the two that appealed to me were radiology and dermatology, because they were both visual,” he says. “After one year of internal medicine, I did a year of radiology but found that hours of standing and reading chest X-rays was not as fascinating as I thought it was going to be. Fortunately a slot opened up in dermatology at Johns Hopkins, so I applied for it, got it and switched from radiology to dermatology.”

After completing a research fellowship in immunologic diseases at the National Institutes of Health, Dr. Weiss initially planned to go back to Johns Hopkins as a full-time junior faculty member. When he realized he was less than enthusiastic about the type of research he was assigned, his plans shifted.

“It was then I decided to open a practice and be part-time faculty at the same time,” he says. “It was 1985 and, at that time, there were none of the constraints or regulations that graduating doctors now have to put up with—it was kind of the norm to start your own little independent practice rather than join a group practice.”

Dr. Weiss admits that a lack of patients in the beginning was worrisome, but he knew it would take time to build a solid patient base. In fact, it took about a year before the practice, then called Dermatology Associates, was able to book 5 to 10 patients a day.

“I grew into it. As the practice got busier over the first two to three years, I started cutting out clinics at Johns Hopkins,” says Dr. Weiss. “I did not have an office manager and had to do everything myself at first. Within a year or two of establishing the office, my wife Margaret also joined the practice. That’s when it started to grow, and we were able to hire more employees.”

One of the unique attributes that helped the Weiss’ build their practice was Dr. Weiss’ interest in laser medicine. He was at the forefront of using laser technologies for dermatologic concerns, acquiring a small CO2 device in 1986 and an argon laser a year later.

“I had a strong interest in devices—I had worked a little bit with the machines in radiology and decided that was the direction I wanted to go. Of course there were no laser fellowships—they didn’t exist,” he says. “Even the pulsed dye laser hadn’t been invented yet. The only things available that were compact enough to be installed in an office were argon lasers for treatment of vascular lesions and CO2 lasers. These were not the sophisticated ones we have today with ultra pulsing. It was a longer pulsed CO2 that could be used to burn off warts.”

Photo by Mike Morgan.
[pagebreak]
By 1989, Dr. Weiss had transitioned to the Hexascan, a device that was attached to the argon laser and allowed you to do a scan across an area to treat larger vascular lesions. He became the go-to physician for that procedure in his region.

In the 1990s, new technologies began to appear. “The first major advances came with the pulsed dye laser, which had only one pulse duration—in the microsecond range. Everyone would bruise and there was no cooling. In an effort to avoid bruising we worked on developing a new device called intense pulsed light (IPL), and that was in 1995. We had no idea how to use it,” says Dr. Weiss. “We would exchange our settings with other practices and finally figured out the pulse duration, what filters to use and how much cold gel we needed to use to actually get it to work.”

After that, laser technologies developed rapidly with the introduction of the ultra-pulsed CO2, followed by ablative resurfacing, then nonablative resurfacing, Q-switched lasers with nanosecond pulsing, as well as radiofrequency (RF) devices to improve skin tightening and picosecond lasers for tattoos.

One of the most important advances that Dr. Weiss was able to help develop was an RF-based replacement for vein stripping introduced in 1997. He would fly out to Berkeley, California, on weekends to perform animal studies with a team that included Mitchel Goldman, MD. They developed the first RF system for endovenous thermal ablation for varicose saphenous veins.

“By 2000, our practice was known for laser procedures, and we added a robust study division. We began doing FDA trials to get lasers and cosmetic devices and drugs approved,” he says. “One of our first major trials on the cosmetic side of dermatology was called Reloxin, now known as Dysport (Galderma). That was a three-year study, and it propelled us into the realm of doing Phase 3 clinical trials on fillers, botulinum toxins and new laser devices.”

Three years ago, he started utilizing a picosecond laser for treating wrinkles, acne scarring and pigmentation problems. Today, his practice has 40 devices in all. “We have the Cynosure PicoSure, and we helped the company develop and do the studies to get FDA approval for a FOCUS Lens Array, which focuses the laser beam into 400 micro-dots that are 20 times stronger than the energy that is available as a flat optic. We have seen some remarkable changes in photoaging,” he says. “Some exciting upcoming trials include a topical botulinum toxin gel, which has been initiated and is currently enrolling new participants. Another frontier is nanoparticle topicals that slide down follicles to treat active acne and to remove white or light hair that could not be removed before with any of our hair removal devices.”

Today, Dr. Weiss’ practice is called the Maryland Laser, Skin and Vein Institute. When patients enter they are greeted by an open reception desk with two friendly staff members. The practice features LED lighting to create a subdued environment, and a TV set at low volume that plays a loop about procedures done at the office. A kitchen, conference room and office space for clinical and clerical staff was recently added to the second floor of the practice’s three-story building.

“We chose a calming color scheme and there’s a Sonos sound system that plays either piano or spa-like music to create a very soothing and relaxing atmosphere,” says Dr. Weiss. “It’s all about making patients feel comfortable.”

His philosophy in practice and life is to treat people in a way that he would want to be treated himself. “We drill into our staff over and over again that our patients are here not because they have to be, but because they want to be. We need to think about customer service, whereas in other aspects of medicine people are just grateful to get an appointment,” he says. “There are many places patients may choose to get Botox or fillers, so we simply have to be the best.”

Photo by Mike Morgan.
[pagebreak]
That not only means providing the best outcomes, but also the cleanest office and best service, which includes making sure that any patient who is dissatisfied gets their problem rectified.

Dr. Weiss’ wife, Margaret Weiss, MD, handles many of the office responsibilities, including meeting with the COO each day to discuss any problems that might be affecting the workplace. “She addresses even the most minor problems, looking for how we can improve,” he says. “My responsibilities are making sure all the lasers and devices are running properly and that we have a good relationship with the companies.”

On staff are four dermatologists, one ASDS fellow, a nurse practitioner, a physician assistant, a registered nurse plus support staff, totaling about 45 employees in all.

“I like to get to know our employees personally. I always say ‘good morning,’ always ‘please’ and ‘thank you.’ We do a baby shower if somebody is about to have a baby,” says Dr. Weiss. “Since it’s Baltimore and we are accustomed to having a winning football team, every time the Baltimore Ravens win, we have a ‘Ravens victory lunch’ where everyone gets a free lunch, whether it is sandwiches, pizza, salad, pasta or Mexican fiesta.

“We also have a patient appreciation week twice a year where we offer discounts on products and services,” he continues. “Every day during that week we provide lunch for our staff. We want to maintain a fun working atmosphere.”

Dr. Weiss also trains ASDS cosmetic dermatology fellows— who typically shadow him for the first few months and then perform laser and other cosmetic procedures under his guidance—and is in charge of the practice’s research division, devoting about 10% of non-patient time to keeping up with his primary investigator responsibilities.

Outside the office, Dr. Weiss enjoys biking and can be found three nights a week riding 15 to 20 miles along Maryland’s scenic North Central Railroad (NCR) trail. This past year, he took a one-week bike trip from Stockholm to Copenhagen.

He is also helping edit his father’s book, since the elder Weiss’ native language is German. The book contains many of the stories and harrowing events his dad went through during the Holocaust, and Dr. Weiss hopes that others may learn from the past and be inspired to change the world for the better—just as he has strived to do in his career.

“Patient satisfaction exceeds 75%. For cellulite, this is quite impressive, especially for a non-invasive therapy that it is so difficult to otherwise effectively treat, and where patient expectations are more difficult to manage.” Dr. Anna Buinewicz
Mar 18th, 2021
Events

Prevalence and Oversight of Midlevel Providers Varies by Specialty

18.35% of dermatology and 25.4% of plastic surgery practices had nurse practitioners and physician assistants giving injectables both with and without oversight of the supervising physician onsite.
Jun 2nd, 2021

See how you can build success in your medical spa or aesthetic practice at the Face & Body with MedEsthetics virtual event happening May 23-26, 2021.
May 18th, 2021

Alan Durkin, MD, and the staff at Ocean Drive Plastic Surgery and MedSpa, pride themselves on offering a full-range of treatments within an environment of caring and open communication.
May 12th, 2021

Top Physicians on the Most in Demand and Challenging Aesthetic Concerns

Tune in live or on demand to learn about the latest techniques, advances and evidence-based approaches for lip agumentation, botulinum toxin dosage and the treatment of melasma.
May 13th, 2021

The current state of sunscreen regulations and tips to improve patient compliance with good sun protection practices.
May 10th, 2021
Follow Us
Most Recent