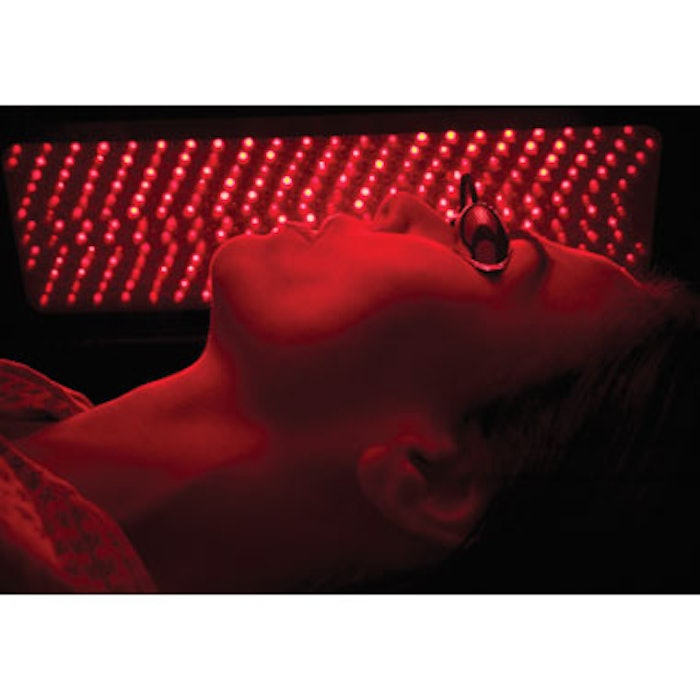 Photodynamic therapy (PDT), the practice of irradiating a photosensitizing agent to damage cells, has a broad—and growing—range of indications. In dermatology, PDT is used to target precancerous and cancerous lesions, reduce the redness of rosacea, and destroy P. acnes bacteria and the sebaceous glands to clear acneic skin. In aesthetic medicine, PDT is also being used as a skin rejuvenation treatment.

“Early on, we noticed that when patients underwent PDT, there was an improvement in skin tone and texture,” says Michael H. Gold, MD, medical director of Gold Skin Care Center in Nashville, Tennessee. “For example, if we used intense pulsed light (IPL) with a photosensitizer, we saw incredible rejuvenation results and some collagen changes—more than we see with IPL alone.”

“The reason PDT improves skin tone and texture is because it targets sun damage on the skin, which is responsible for a lot of the signs of aging,” says Doris Day, MD, founder of Day Dermatology & Aesthetics in New York City. “So it’s not just that the skin looks better, the skin is better after PDT. It stimulates the natural wound repair process, which includes new collagen formation for younger, healthier skin.”

With so many tools for skin rejuvenation now available, the question is, where does PDT fit as a stand-alone aesthetic treatment?

One of the first considerations in patient selection for PDT skin rejuvenation is the presence—or lack—of actinic keratoses (AKs). “PDT with blue light is FDA approved for the removal of AKs on the face and scalp,” says Dr. Gold. “You will see a rejuvenation effect, but the patient has to have AKs to charge insurance, and you have to document the number of AKs and their locations. Once somebody starts talking about PDT with a device other than blue light—or blue light PDT for a patient who has no AKs—that is a cosmetic treatment.”

The most commonly used topical photosensitizer for photodamage and AKs is 5-aminolevulinic acid (sold under the brand name Levulan, DUSA Pharmaceuticals), which can be combined with blue light, red light, IPL or pulsed dye lasers (PDL) for vascular concerns.

For patients without AKs seeking skin rejuvenation, the two main criteria to consider when selecting among peels, PDT and resurfacing lasers are the health of the patient’s skin and their tolerance for downtime.

Todd E. Schlesinger, MD, director of the Dermatology & Laser Center of Charleston and the Clinical Research Center of the Carolinas in Charleston, South Carolina, considers PDT primarily for patients with photodamage-related AKs and/or skin discoloration. “A fair-skinned person who has a larger number of precancerous lesions or mottled pigmentation, such as multiple lentigenes or dark freckles on the face, is a great candidate for PDT versus laser alone,” he says. “If the patient’s skin is not elastotic, meaning they have a tremendous amount of wrinkling or they have very loose, thin skin, they are better served with ablative or nonablative laser resurfacing.”

Photo copyright Getty Images.
[pagebreak]
For select patients seeking skin rejuvenation on and off the face, Dr. Gold typically performs PDT with Levulan and IPL. He notes that the rising cost of the Levulan KERASTICK has made it a less cost-effective option than it was years ago. “When I first started it was $80 for the Levulan KERASTICK; now it’s $300-$400 plus the cost of the IPL treatment,” he says. “But you don’t have to do as many sessions. If you normally do three to four IPL sessions for photorejuvenation, the patient may only need one or two sessions with the Levulan, so the cost ends up about the same.”

PDT patients will experience one to three days of redness and will need to avoid sun exposure for up to 48 hours after treatment. This places the length of recovery somewhere between IPL alone and fractional ablative lasers, and it is a key consideration for Dr. Gold’s patients. “One of the things we always discuss is how much downtime they can give me. When you do PDT, the patient is going to get a little red—and everyone is a bit different—but you will have a day to three days of redness,” he says. “If you do a fractional ablative resurfacing procedure, you may have seven to nine days of downtime, so it’s sort of in between IPL and ablative fractional lasers in terms of both downtime and results.”

The post-treatment sun avoidance requirement is the main reason PDT has not become a regular treatment for rejuvenation alone in Dr. Day’s practice. “It is not an ideal treatment for my patients who want to get on with their lives and don’t want to have to spend time indoors,” she says.

The light source used will affect the number of sessions needed to achieve optimal rejuvenation results. “If we use the IPL in combination with PDT, we typically treat at least three sessions with a couple of standard IPL treatments in between,” says Dr. Schlesinger. “If we use blue light PDT, we do between four and six sessions for optimal results. But oftentimes, you will realize very good results in just two or three sessions with blue light PDT for simple sun damage.”

For patients with AKs, blue light offers better results than IPL for removal of the lesions, notes Dr. Schlesinger. It is also covered by insurance.

If the patient does not have AKs and is seeking skin rejuvenation only, Dr. Schlesinger looks again at skin quality. “If someone’s skin is sallow and they have a little more loss of collagen, then we’re going to recommend IPL because the heat it generates will actually activate neocollagenesis and build new collagen,” he says. “If they are a little bit younger and healthier, and their skin doesn’t have as much collagen damage—it’s a little bit thicker and more youthful—then we can recommend the blue light PDT as well.”

Per labeling instructions, Levulan has an 18-hour incubation time, a directive that few practitioners follow, says Dr. Schlesinger. “In common use, we employ a technique called BASDI, which is broad area/short duration incubation,” he says. “Most practitioners will leave the Levulan on for between one and four hours depending on the indication. The label says 18 hours. Most practitioners agree that is too long.”

Photo copyright Getty Images.
[pagebreak]
To achieve the best results and recovery, Dr. Schlesinger advises patients to avoid their regular skincare regimen for two days before each PDT treatment and then resume it three to five days after.

“We want them to avoid retinoids and any other vitamin A-based topicals as well as any peeling products, because they will increase the sensitivity of the skin. They also cannot have a current sunburn or tan,” he says.

In some cases, Dr. Schlesinger will encourage patients to continue their use of retinoids, or undergo a light chemical peel or microneedling treatment prior to PDT to increase the aggressiveness of the treatment. “This is for patients who are well established,” he says. “If you know the patient well and want to increase the intensity and result of the PDT, you can either increase the incubation time of the Levulan, increase the energy of the laser, or you can have the patient use retinoids, undergo a series of light peels or undergo microneedling prior to PDT. If the patient hasn’t had PDT before or I don’t know them well, I start with standard therapy and see how their skin reacts.”

It takes up to 48 hours for the 5-aminolevulinic acid to deactivate, so patients must avoid sun exposure. “This is a photosensitizing treatment, so if you go out into the sun without covering the treated area you are going to turn really red and it can get uncomfortable,” says Dr. Gold.

Dr. Schlesinger advises his patients to stay indoors and avoid both windows and bright halogen lights for the first 48 hours, because the light will activate the Levulan. He also recommends a simple skincare regimen with a light moisturizer for at least three days post-treatment. Ice packs and anti-inflammatories can be used to decrease swelling,
if needed.

To make recovery easier on patients, Dr. Day recommends doing PDT treatments in the afternoon during the winter season. “They can stay at home that night and the next day during daylight. If you do it during the winter when the days are shorter, then there are less daylight hours to worry about, so that’s the best time of year to do it. I tell patients to stay indoors with the blinds down for at least 24 hours after treatment,” she says.