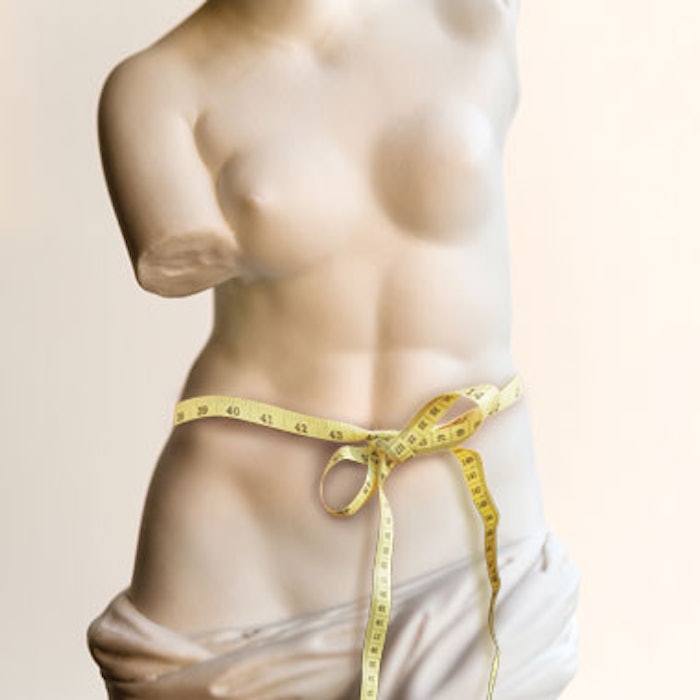 In the five years since Zeltiq’s CoolSculpting device first received U.S. Food and Drug Administration (FDA) approval for the noninvasive destruction of fat in the abdomen, the medical aesthetics industry has seen an array of FDA-cleared fat reduction technologies enter the market. Each is designed to permanently thin down thighs, blast away back flab, whittle middles or slim chin chub with minimal or no downtime.

“Through social media and the internet, consumers are seeing that these nonsurgical treatments actually deliver,” says Jonathan Kaplan, MD, a San Francisco-based plastic surgeon. The benefit to practices, he says, is that these procedures are appealing to consumers who would never undergo surgery, yet are greatly bothered by unwanted areas of fat.

To help you determine whether these technologies—and which ones—are a good fit for your patient base, we spoke with plastic surgeons and dermatologists who are using the latest fat-reduction modalities in their own practices and asked them to share their experiences.

Prior to the 2015 FDA approval of Allergan’s injectable Kybella (deoxycholic acid) for the treatment of submental fat, fat reduction and body contouring treatments typically focused on the abdomen, trunks, thighs and arms. Patients who wanted to rid themselves of their double chins had only the option of surgery, liposuction or radiofrequency (RF)-based skin tightening, which could only firm the area for minimal results.

“Kybella is based on mesotherapy,” explains Denver-based plastic surgeon Manish H. Shah, MD. “Its advantages are that it is easy to perform, patient discomfort is minimal and results are permanent.”

But there are downsides: “Many patients need several treatments. (Practitioners can perform up to six treatments spaced one month apart, according to Allergan.) The treatment zone is mostly located in the central neck, leaving lateral neck fat untreated. Results take up to eight weeks to manifest in most patients, and the social downtime is extensive,” says Dr. Shah, who recently underwent the procedure himself so he could offer patients a firsthand account of what to expect.

“I had noticeable swelling in my neck for a good two weeks—I looked like a little frog—as well as numbness in the area that disappeared by 10 weeks post-treatment,” he says.
Jennifer Herrmann, MD, participated in the Kybella clinical trials and continues to offer the procedure in her Beverly Hills, California-based dermatology practice. She finds that most patients require two or three treatments, and she charges $600 per vial, with one to two vials required per session.

“Downtime depends on patient factors and how much product is injected,” she says. “Patients on blood thinners may experience more bruising, and those who have higher volumes injected may have swelling that lasts up to a few weeks. I typically space injections every four to six weeks.”

Image: Getty Images.
[pagebreak]
Following the launch of Kybella, Zeltiq introduced the CoolSculpting CoolMini applicator for the treatment of submental fat, providing a second noninvasive option for patients seeking to rid themselves of their double chins. CoolSculpting uses cryolipolysis to induce apoptosis of adipose cells without harming surrounding tissue. Because the applicator must be applied to the fat pocket for 45 minutes, the treatment is best suited for patients with significant submental fat, says Vic Narurkar, MD, medical director of the Bay Area Laser Institute in San Francisco.

“For these patients, we first debulk with the CoolMini and then fine-tune with Kybella,” he says.

Fat Destruction On The Body

While the use of CoolSculpting for submental fat is attracting interest among patients and physicians alike, the procedure is still primarily used for fat removal on the body. The CoolSculpting system includes applicators of various shapes and sizes, each designed to target specific treatment areas including the abdomen, flanks, thighs and arms.
“We use CoolSculpting for the abdomen, love handles and bra fat, where it is a home run,” says Dr. Narurkar.

The most serious adverse event is paradoxical hyperplasia, which appears to be rare, affecting anywhere from 0.0051% of patients (Jalian HR, JAMA Dermatology, March 2014) to 0.47% (Singh SM, Lasers in Surgery and Medicine, August 2015). “We have had one case so far in seven years,” says Dr. Narurkar.

He introduced the procedure in his practice in 2014 and highly recommends it to patients seeking noninvasive fat reduction. “It works—95% of patients are happy with their results after one treatment, and there is no downtime,” says Dr. Kaplan. “I’ve had the treatment done to myself and I went jogging afterwards.”

What’s more, he adds, the procedure “has a good profit margin, can be provided by a nurse—but doesn’t require their constant presence—and is performed without any type of sedative or anesthesia.”

The procedure has been so successful in his practice that Dr. Kaplan purchased a second device. “Now we can treat twice the fat in half the time,” he says. “This gives us a marketing edge, considering the San Francisco Bay Area is saturated with CoolSculpting machines.”

Image: Getty Images.
[pagebreak]
Alix Charles, MD, a dermatologist with DuPage Medical Group in Downers Grove, Illinois, began offering UltraShape treatments two years ago in response to patient requests for nonsurgical procedures that would shrink their bellies and help them fit better into their clothing. “It quickly became one of our most popular offerings,” he says.

The FDA has cleared UltraShape for fat destruction in the abdominal region. “We also have a track record for success using it off-label to contour the flanks, inner thighs, outer thighs and other areas of the body,” says Dr. Charles.

The procedure appeals to patients because “it is painless, with minimal risk of side effects,” he says. “Also, results can be seen quickly—in as soon as six weeks.”

Most patients require multiple treatments to achieve their desired outcomes. “The average patient who undergoes three treatments for their abdomen sees a one- to three-inch reduction in circumference,” says Dr. Charles, who charges about $3,000 for a three-treatment series. “Patients are thrilled as this can represent up to two pant sizes.”

The one downside to CoolSculpting, Kybella and UltraShape is that they do not offer skin tightening. Patients with significant pockets of fat and less elastotic skin may require additional treatment with RF- or ultrasound-based skin tightening technologies following fat destruction. Physicians may also opt to go straight to RF, which offers both fat cell destruction and dermal tightening.

Dr. Herrmann previously offered CoolSculpting, but has since switched to RF devices, including Thermi’s ThermiSmooth and BTL Aesthetics’ Vanquish ME, for treatment of the abdomen, love handles, lower back, bra bulge and thighs.

“Several years ago we participated in some initial RF investigational studies, and we have continued to expand our armamentaria of these technologies,” she says. “I prefer RF devices because the heat not only targets and reduces fat, but also tightens the skin. In effect, we are able to ‘shrink wrap’ treatment areas. For patients with skin laxity, the ability to tighten skin while also diminishing fat is cosmetically appealing.”

Vanquish ME and ThermiSmooth RF treatments take about 45 minutes and are typically comfortable. Dr. Herrmann’s patients say they feel like they are wearing a large heating pad during the procedure. Most of her patients lose two to four inches of fat in a four- to six-treatment series, and there is no downtime.

“Final results are typically seen after one to two months,” she says. “Patients pay from $350 for a single treatment up to $4,500 for a package. Most don’t notice significant weight change, but their clothes tend to fit better and their body confidence soars.”

There are several devices now available for patients seeking noninvasive fat reduction and body contouring. If you are thinking of adding these services to your practice or medspa, you can compare energy sources used, FDA-cleared indications and potential treatment areas here: http://medesthetics.epubxp.com/i/789729-mar-2017/42