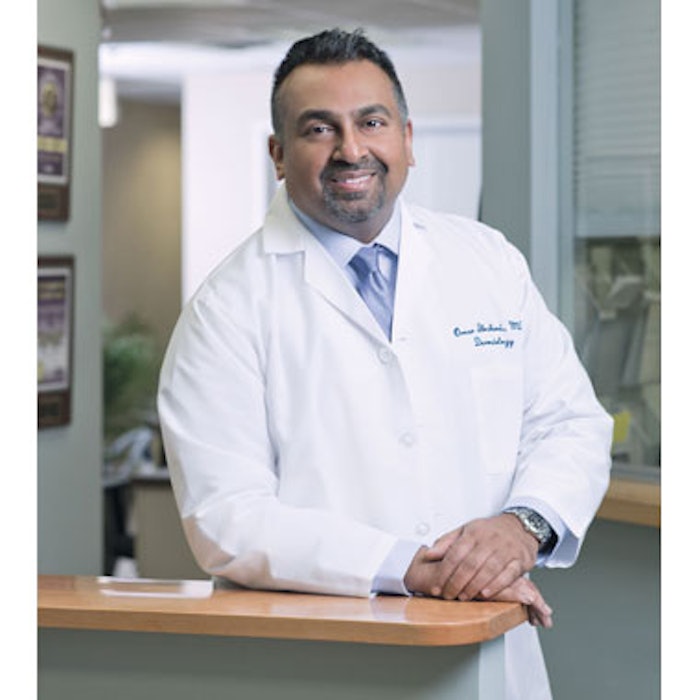 While in medical school, Omar A. Ibrahimi, MD, PhD, became intrigued by dermatology. “I was struck by how dermatologists take care of newborns to the elderly, and I was impressed by how dermatologists need firm grounding in both medicine and surgery,” he says. “In the same day, they could be diagnosing a complex blistering disorder and then performing a surgical procedure. I thought that kind of diversity would keep things interesting and engaging for me as a clinician.”

The son of immigrant parents from Pakistan who stressed the importance of education, Dr. Ibrahimi is the first physician in his family. He grew up in Queens, New York, and graduated from Stuyvesant High School, a public college-preparatory school that emphasizes math and science.

Today, Dr. Ibrahimi, who won the 2017 American Society for Dermatologic Surgery Award for Outstanding Service, owns and operates the Connecticut Skin Institute, one of the state’s most comprehensive and well-regarded laser practices.
his mentors and role models

He completed a National Institutes of Health-funded medical scientist training program at New York University that allowed him to earn his medical degree and PhD simultaneously before heading to Massachusetts General Hospital/Harvard Medical School to complete his residency.

Here, he had the opportunity to train under R. Rox Anderson, MD, PhD. “In my opinion, Dr. Anderson is the most influential living dermatologist,” says Dr. Ibrahimi. “He invented laser hair removal, cryolipolysis to get rid of unwanted fat, fractional microneedling with radiofrequency, and treatments for complex burn scars and wound healing. And his work doesn’t stop at dermatology. He’s constantly looking for ways to improve patients’ lives with lasers and energy-based instruments across specialties.”

Dr. Ibrahimi, who shared Dr. Anderson’s love of physics and medicine, began spending a lot of time at the Wellman Center for Photomedicine. “I was fascinated,” he says. “It’s an entire building devoted to looking at how light can be used in medicine.”

During the final year of his residency, an incredible opportunity presented itself. “Typically, Dr. Anderson has two laser fellows each year. But, for some reason, none of the candidates who applied that year were selected,” says Dr. Ibrahimi. “Even though I was still a year away from being able to apply, I took all my vacation time and volunteered to help Dr. Anderson in his clinics. It turned out to be the greatest thing that ever happened to me.”

Alongside Dr. Anderson, Dr. Ibrahimi treated cases that required sedation. People with vascular and pigmented birthmarks, all types of scars and rare dermatologic conditions flew in from all over the world seeking Dr. Anderson’s expertise.
“It was a phenomenal experience for which I am still grateful,” Dr. Ibrahimi says. “Having a mentor and role model like Dr. Anderson was all I needed to fall in love with lasers.”

Following residency, Dr. Ibrahimi completed a fellowship in Mohs and Reconstructive Surgery as well as laser and cosmetic surgery with another giant in the field: Suzanne Kilmer, MD. “Dr. Kilmer was one of Dr. Anderson’s first fellows. She knew I had a good background in lasers and allowed me to treat my own patients from the beginning,” he says. “This was critical because as important as knowledge is, refining one’s technique is crucial to delivering a great result to the patient.”

Following his fellowship, Dr. Ibrahimi returned to academics and garnered a 50 percent appointment at the Wellman Center for Photomedicine. He also saw patients at the University of Connecticut. For three years, he split his time between research, teaching residents and seeing patients.

Although he loved the faculty and teaching, the bureaucracy made resolving issues sticky at times. For example, lasers heated up the room where he was teaching so much that it became unbearable, but getting the issue addressed was a lengthy process. “We’d have to have a meeting to arrange a meeting to make a budget proposal,” he says. “I realized I was not going to be able to participate in clinical trials, because nothing moved fast enough at a public university.”

His frustration reached the boiling point when administrators told him it would take two years or more to bring on a new technology. Then came the realization: “If I truly wanted to build a successful clinical practice, I needed to be able to bring on technology much faster than is possible at a state-run institution,” he says. “I don’t have the patience to wait and didn’t want to do things that were suboptimal for patients’ lives.”

He interviewed at several private practices. “The majority were not interested in creating an office that was capable of offering all of the laser- and device-based services I wanted to offer,” says Dr. Ibrahimi. He started contemplating a step that he never expected to take: opening his own private practice.

In the fall of 2012, he founded the Connecticut Skin Institute in Stamford, Connecticut. He selected the location because it was a commuter town to New York City, and he didn’t know of any other dermatology practices nearby with a heavy focus on lasers. “Launching my own practice was the most challenging thing I have done,” he says. “I am a scientist and clinician at heart. I know very little about business and I had no interest in it. However, I knew I wanted my practice to be regarded as one of the few centers in the country that was capable of delivering every type of laser and energy device treatment available by a board-certified and fellowship-trained dermatologist who really understands laser-tissue interaction.”

Because money was tight, he took the guerilla marketing approach. He knocked on doors and introduced himself to all the physicians in the community to let them know he was available and interested in taking care of their patients. He offered educational lectures at the local YMCA and called up large corporations, offering to speak and do skin cancer screenings during employee health days. “I tried to stay positive,” says Dr. Ibrahimi. “But this region was still reeling from the financial crisis of 2008, and then Hurricane Sandy hit. It wasn’t a great time to open a practice.”

He buckled down on his finances and saw patients at other practices. “I was extremely conservative in my business plan,” he says. “I saved money, lived below my means and moonlighted at a few practices while building my own. Fortunately, I had done much of the legwork myself. After just a few months, we started to break even and then make a profit.”

As referring physicians heard more and more good reports about the care he gave their patients, the practice got busier and busier. In addition, he developed a niche for treating patients with darker skin types and started getting patients from all over the United States and as far away as the Middle East.

He also specializes in treating infants with birthmarks. “In recent years, awareness has grown about the long-term impact bullying has on self-esteem, and the health and appearance of our skin plays an important role in that,” he says. “Skin disease is rarely life or death, but it can seriously affect quality of life.”

As soon as his practice started turning a profit, he took the majority of those profits and put them right back into the practice, buying more and more technology. “Today we own over 30 devices,” he says.

In addition to his extensive experience with laser- and light-based devices, Dr. Ibrahimi, who is a Fellow in Mohs and reconstructive surgery and a member of the American College of Mohs Surgery, credits his training as a surgeon and a scientist with allowing him to deliver topnotch results to patients. “I understand science and the anatomy the way only a facial surgeon can,” he says. “There’s a greater appreciation for the muscles, the nerves and understanding the 3D nature of the skin.”

While being a doctor came naturally to Dr. Ibrahimi, who thrives on taking care of patients, owning his own practice did not. “When you are an owner, there are 24/7 demands. The practice is like a living and breathing baby that needs constant attention and nurturing,” he says. “I am fortunate in that I was lucky enough to find a few key employees who believe in the mission of our practice and have dedicated themselves to elevating the practice.”

Early on, he ran into some unwelcome surprises. He was unaware that in Connecticut his property taxes would include business assets, such as his extremely expensive lasers. When he got his first property tax bill, he called his accountant to find out if there’d been some mistake.

“I had wondered why practices in this area had so little technology,” he says. “When I got that property tax bill, I understood. But it worked out, because we do a good job of taking care of patients and are in a high-demand area. It gives me a great sense of pride when I walk into the practice and see how large the office is and how many devices and how much technology we offer.”

When it comes to selecting new technologies, he is careful not to get drawn into focusing on profitability. “I am driven by what will achieve the best outcomes from my patients,” he says. “I want to know first and foremost, does it work? I’d rather sleep well at night, knowing that I’m doing my best for my patients versus knowing that I’m getting a big profit margin.”

This philosophy is working. In 2017, he launched a second location in Milford, Connecticut, to keep up with
the intense demand in the region. His secret to success: “The only secret to overcoming the challenges of running
a practice is keep grinding away and never give up,” he says.