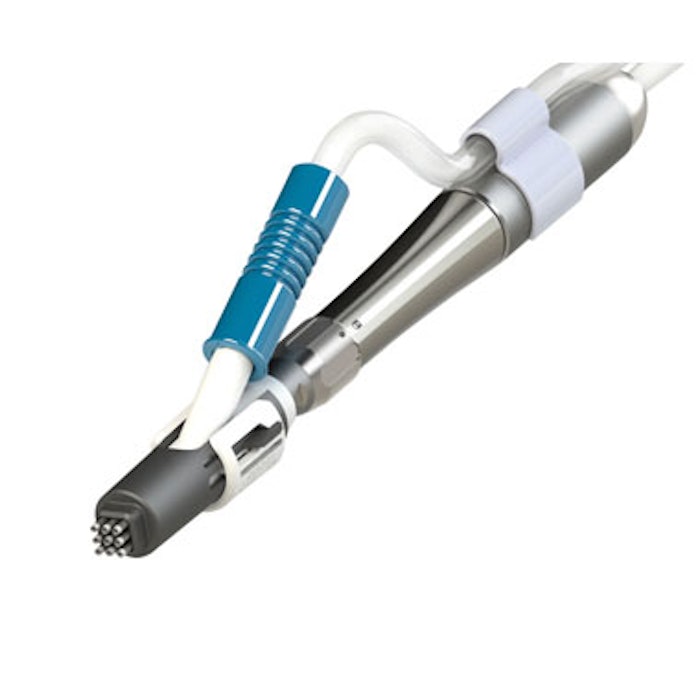 "Having something effective for the neck that doesn’t require surgery is sort of the holy grail in plastic surgery,” says Kamakshi R. Zeidler, MD, board-certified plastic surgeon and co-founder of Aesthetx in Campbell, California. “So when I learned about Rotational Fractional Resection (RFR) technology I was excited.”

Dr. Zeidler was a co-investigator of Recros Medica’s Nuvellus Focal Contouring System for submental contouring. The system uses RFR, a novel technology developed by plastic surgeon Edward Knowlton, MD, that uses tiny cutting instruments, referred to as scalpets, that rotate at 400 RPMs. “What we’re doing with RFR is excising a divot of skin that is 1.5mm in diameter and between 2mm and 6mm in length,” says Tom Albright, CEO of Recros Medica. “We treat patients with between 300 and 700 of these tiny resections of skin. By doing this we’re able to take out 25 percent of the skin, which is very similar to what would be removed in a target area during aesthetic plastic surgery.” The excised skin is then vacuumed away through the handpiece.

The U.S. Food & Drug Administration (FDA) accepted the company’s de novo regulatory submission for review in May based on the results of the multi-center CONFORM study, which included 68 subjects. The study, which focused on submental contouring, revealed high patient satisfaction with 82 percent of subjects satisfied with the appearance of their neck and jawline at 90 days post treatment, and 94 percent of patients at Day 90 indicating they were likely to recommend the procedure to friends and family.

For this particular indication, the treatment has two components—lipectomy of fat in the submental region followed by skin resection. “The technology is meant to be employed as a two-fold treatment,” explains Dr. Zeidler. “There is a rotational lipectomy tip—it’s like a little cannula that removes tiny areas of fat, and then you switch that out to the tip that is designed to excise skin.”

Following treatment, a membrane is applied to the treatment area in-office and remains in place for four to seven days. The covering not only protects skin, it improves the contouring results. “We know from surgery that when you take out a circle of skin and then stretch it, you can form a line, which allows you to control the orientation in which the skin heals,” says Dr. Zeidler. “The application of the adhesive dressing keeps the scars healing in that orientation. It’s very easy. It’s very clean. It’s simple for patients, and it enhances the healing in a specific orientation that improves the results.”
The company views Nuvellus as a new option for patients with a higher degree of laxity than can be adequately addressed with noninvasive energy-based devices and who don’t want surgery.

Dr. Zeidler treated 15 patients at her practice as part of the CONFORM study and was impressed with the high level of patient satisfaction. “The patients have been even happier than I expected them to be with the improvement of that neckline contour,” she says. “If you look at what people are always complaining about, which is photographs from a side view, that, in particular, is where you see significant improvement. It’s not quite what you can get with surgery, but far better than what I’ve seen with other nonsurgical techniques, such as CoolSculpting and Kybella, and certainly better than what I’ve seen with radiofrequency or laser-based devices.”

The CONFORM study was designed to determine safety and efficacy of the treatment. The next set of studies will focus on optimizing aftercare, says Albright. With the de novo application in process, the company anticipates FDA clearance in late 2019 and plans to investigate additional indications for the technology in the future.