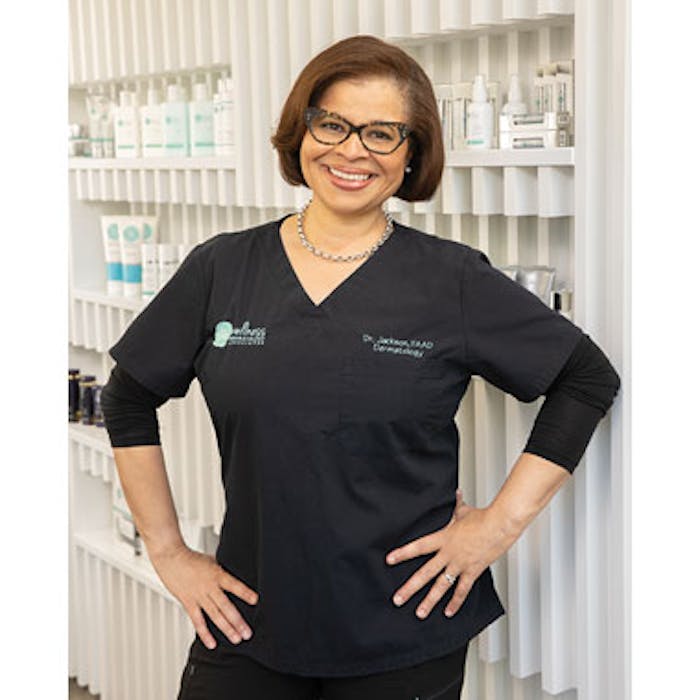 For dermatologist Brooke Jackson, MD, a love of learning and science began at an early age. Her father, Marvin Jackson, MD, was the chair of the pathology department at Howard University, and her mother was a public school teacher in Washington, DC. “I grew up in the halls of Howard University Medical School and fondly remember looking at preserved human body parts in the cases that lined the walls of the hallway,” says Dr. Jackson, who is the owner and medical director of Skin Wellness Dermatology Associates in Durham, North Carolina. “My father was always present and supportive. A pathologist rarely has an emergency, so he was often home for dinner. He helped me with homework and was there for my school performances.”

Her interest in dermatology was piqued both by her childhood and medical school experiences. One of her family’s neighbors was John Kenney, MD, the founding chair of the department of dermatology at Howard University, who treated her pityriasis alba and keratosis pilaris when she was young.

“I was initially drawn to obstetrics and gynecology,” says Dr. Jackson. But while doing her OB/GYN rotation at Georgetown University medical school, she was disheartened when one of the older attendees said if he had to do it again, he would have chosen a different specialty. “He said that he had four children and had missed every single one of their graduations,” she recalls.

When she entered her dermatology rotation, she quickly realized this was the right specialty for her. “I enjoy working with men, women and children, performing procedures and developing long-term relationships with patients, and the field of dermatology encompasses all of these things,” says Dr. Jackson, who lectures nationally on cosmetic procedures in skin of color and is the author of two books, Child of Mine: Caring for the Skin and Hair of Your Adopted Child and Skin Care for Runners.

After receiving her medical degree at Georgetown University, Dr. Jackson completed her dermatology residency at Henry Ford Hospital and a laser surgery fellowship with Kenneth Arndt, MD, at Harvard University. This is where she developed both a love of lasers and a concern that so little information existed on laser-tissue interaction in patients with darker skin types.

During her fellowship, she invited a few patients with skin of color in after hours to see how their tissue would react to the lasers and quickly realized that the pigment in their skin was absorbing too much of the laser energy, causing damage. “This piqued my interest. I was fortunate to be involved in some of the early laser hair removal studies involving darker skin,” she says. “Laser hair removal is so impactful on women with skin of color, because so many of them have unwanted facial hair, which affects their self-esteem. I had patients who literally broke down into happy tears after their treatments knowing they didn’t have to wake up and shave anymore. It was so satisfying that we could now help these patients.”

Dr. Jackson completed a second fellowship in Mohs micrographic surgery with Leonard H. Goldberg, MD, in Houston, and stayed in the area to develop and launch the Mohs Dermasurgery unit at MD Anderson Cancer Center. She next moved to Chicago, where she held a clinical faculty position in the department of dermatology at Northwestern University for 10 years.

During this time she also opened her first practice, the Skin Wellness Center of Chicago, and became more actively involved in a passion she developed in Houston: running. “I did not grow up running but I joined a running group in Houston during my fellowship year and ran my first marathon,” says Dr. Jackson, who has completed 10 marathons. “When I moved to Chicago, I started looking at the running community and realized that the groups that were available were for people who were super-fast, competitive runners. There was nothing for people like me who were not that fast, but wanted to do it. So I started my own group on the South Side of Chicago. It grew to more than 400 members.”

Today, she speaks with running clubs about the importance of sun protection and skin care and has served on the board of “Girls Who Run.” Her experience in organizing the running group coincided with her move into private practice. She took all of her personal experiences and put them to work in finding and developing a staff that would help her grow the practice of her dreams.

“Dr. Goldberg was transitioning to private practice during my fellowship with him, so I was able to observe the nitty-gritty of setting up a new practice,” she says. “Having been part of many clinical and academic environments, I also have seen what works and what doesn’t with staff. I decided to build my own environment and incorporate the best of what I had experienced in other positions and avoid the worst.”

Her goal was to be a hands-on, approachable leader. “We incorporated morning huddles,” says Dr. Jackson. “I had—and still have—a small staff, which means it is always all hands on deck. So I look for people who are accountable. Once you find the right employees and they gel as a group, everything works beautifully.”

In 2013, she and her family relocated to North Carolina’s Triangle area where she briefly worked as an associate professor at the University of North Carolina (UNC), Chapel Hill, before opening her current practice, Skin Wellness Dermatology Associates.

“When I opened my practice in Chicago, I was single with no kids and I had a 10-year lease on my office space,” she says. “At the end of those 10 years, I was married with three children (twin girls Avery and Reese, who are now 12, and son Myles, who is now 10). There came a point where it was less about my career and more about family.”

Dr. Jackson’s father had passed away shortly before she opened her practice in Chicago and, 10 years later, her mother was getting older. “I am the child who is primarily responsible for her care, so my husband, James, and I looked for a place that was suitable for three generations and offered the opportunity for a better work/life balance,” she says.

The couple took out a piece of paper and wrote down all that they wanted from the next stage of life in terms of weather, overall quality of life, schools and proximity to family. They settled on North Carolina. “We have campouts in the living room every Friday night—we make popcorn and watch a movie,” says Dr. Jackson. “I am a hands-on mom but not a helicopter mom. I vowed that I am never going to let my children look out in the audience for their performance and not see me there. I will alter my schedule and explain to patients that my kids come first.”

Those who visited her Chicago practice may be surprised by the very different look of Skin Wellness Dermatology Associates. The Chicago office had an Asian-influenced Zen feel, while the new one is very minimalist. “I actually brought my architect from Chicago in to design it because I wasn’t finding anything here that portrayed my vision—clean, simple, warm and welcoming,” says Dr. Jackson.

Some of the design choices also related to the region. With both Duke University and the UNC close by, everything in the area seemed to be a shade of blue. But being affiliated with neither institution, Dr. Jackson decided to avoid that palette. “The color blue is a religion in this area, and I didn’t want to spend my days talking about whether I’m a Duke or UNC fan, so my office is green,” she says.

When people walk in, the first thing they see is a huge window highlighting the lush trees behind the practice. Dr. Jackson chose that tree-side of the building so her patients would feel as if they were walking into nature. “The office is bright and clean. The feedback I get from patients is that that they’ve never been in an office like this—it’s beautiful and it’s peaceful,” she says. “I wanted it to be professional but not excessively medicinal like a hospital. I want people to feel comfortable and relaxed and embrace the self-care path they are embarking on.”

Dr. Jackson also changed how she staffed the new practice, hiring pre-med students as medical assistants. They stay with her for two years. “I want staff who are eager to learn, have the capacity to learn quickly and are sincerely interested in becoming doctors,” she says. “The pre-med students pick things up very quickly and have a different level of commitment. I teach them, mentor them and let them fly as medical students, which is really rewarding. This arrangement also brings academics into my practice, which I very much enjoy.”

Dr. Jackson is also active on Instagram (@dr.brooke.jackson). She uses the page as a marketing, educational and inspirational tool for patients. “We have a lot of fun with it,” she says. “We create mini-dramedies highlighting the importance of skin care and protection and create office characters such as ‘The Derminator.’”

One of Dr. Jackson's favorite aspects of dermatology is establishing ongoing relationships with patients and getting to know them well. “With dermatology, you are looking at the skin, but there are so many things that play a role in skin health, including stress. If someone is going through a transition or difficult time in life, it might explain why their acne is getting worse,” she says. “My staff always comments that I’m part dermatologist/part therapist, and that is part of the job.”

From a practice standpoint, her future goal is to transition to a fully elective practice. “Medicine is changing rapidly and patients’ primary dissatisfaction is financial,” she says. “Patients don’t understand their insurance, and doctors are expected to explain it. That can be really frustrating. I spend a lot of time that could be spent caring for patients explaining co-pays and coverage, doing prior authorizations and trying to find a medication that is suitable and covered by their insurance plan. It sucks the joy out of practicing medicine.”

For those who want to follow in her footsteps, her advice is simple: Build it and they will come. “If you are a good doctor and take pride in your work, there’s no reason why you won’t be successful. You should do your thing and not someone else’s thing,” says Dr. Jackson. “Develop a niche, and you will find your tribe.” 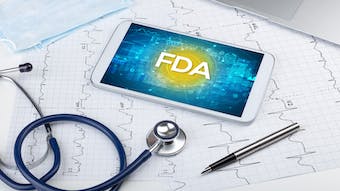 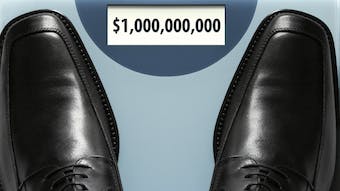 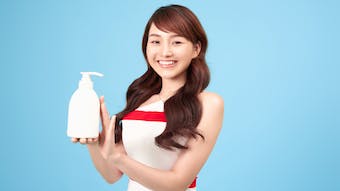 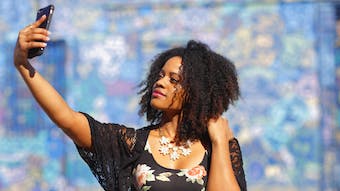 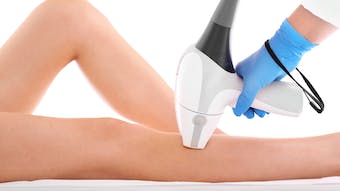 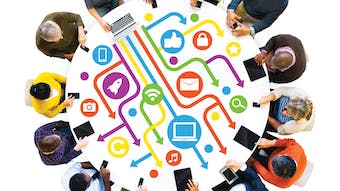 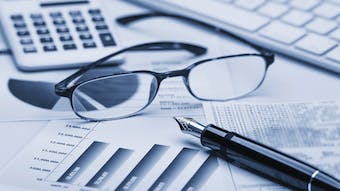 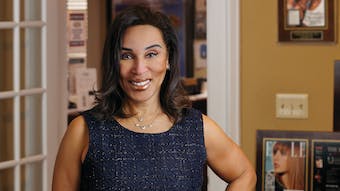