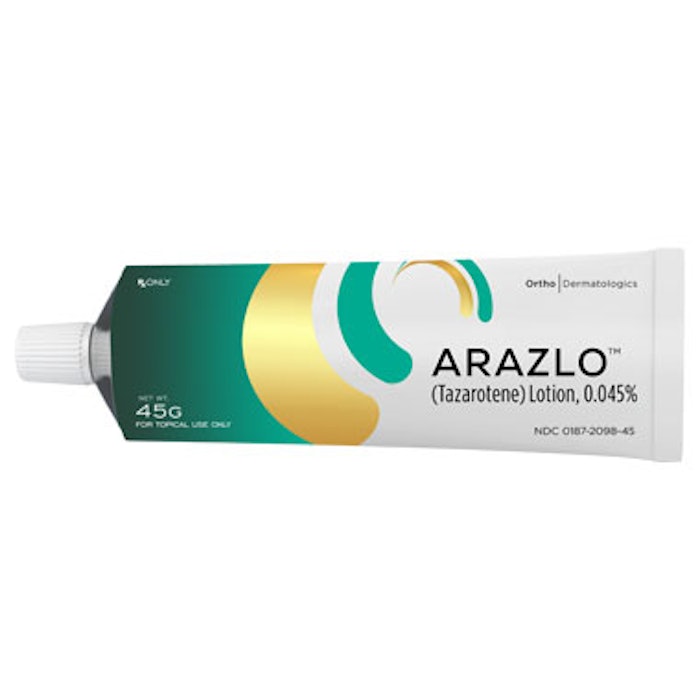 The U.S. Food and Drug Administration has approved the New Drug Application for Ortho Dermatologics’ ARAZLO (tazarotene) Lotion, 0.045%, for the topical treatment of acne vulgaris in patients nine years of age and older. ARAZLO is the first tazarotene acne treatment available in a lotion form, and has been shown to provide strong efficacy with favorable tolerability.

In two Phase 3 multicenter, randomized, double-blind, vehicle-controlled clinical trials that included 1,614 patients with moderate to severe acne, all primary efficacy endpoints were met with statistical significance. In a Phase 2, head-to-head study, ARAZLO and Tazorac (tazarotene) Cream 0.1% showed similar treatment success rates and similar reductions in both inflammatory and noninflammatory lesions over 12 weeks. While there were no significant differences in patient satisfaction or quality of life between the two treatments and both were well tolerated, there were fewer treatment-related adverse events in the ARAZLO treatment group (2.9 percent versus 5.6 percent with Tazorac).

“Today’s approval of ARAZLO showcases our continued commitment to expanding our acne portfolio to help the approximately 50 million Americans who are impacted by this prevalent skin condition,” said Bill Humphries, president, Ortho Dermatologics. “As our fourth FDA approval in just 14 months, ARAZLO will provide dermatologists the efficacy expected of tazarotene in a new formulation that helps minimize the dryness and irritation historically associated with tazarotene use, which can cause many acne patients to discontinue treatment. We are purposely timing the launch of ARAZLO to coincide with the start of acne season in the first half of 2020.”