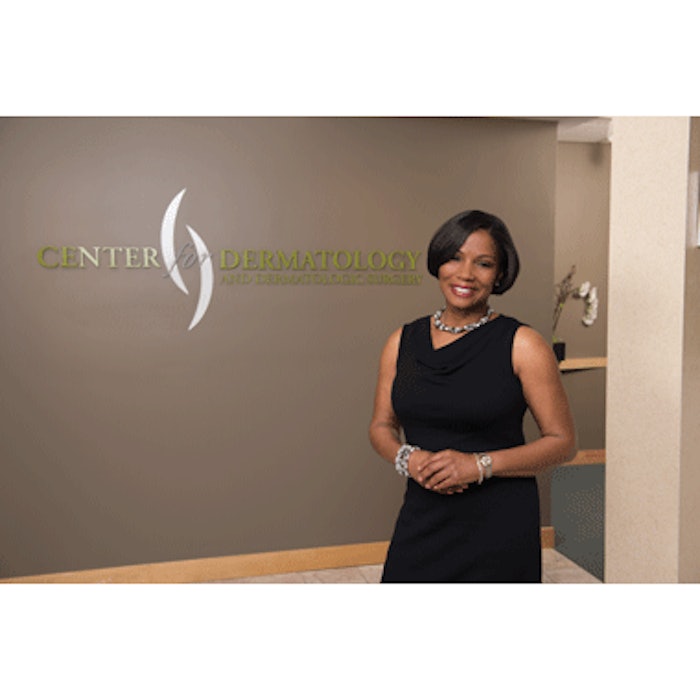 When she was a medical student at the Howard University College of Medicine, Cheryl M. Burgess, MD, landed a summer job at the National Institutes of Health Department of Dermatology as part of its Public Health Service. Two others had been offered the same job—and had quickly quit.

“It was our job to physically examine and interact with patients who had the most severe, obscure dermatoses,” she says. “These people had disfiguring conditions such as neurofibromatosis. Some of them worked in circus traveling shows, such as ‘the Elephant Man,’” says Dr. Burgess.

A Day In the Life

Several decades later, Dr. Burgess offers both medical and cosmetic dermatology care in her downtown Washington, D.C., practice. “Most of all, I want to make people with medical conditions look and feel better,” she says. “Dermatology hits the points of all my interests. I like patient contact, but I also like the academic and research aspects.”

Since launching the Center for Dermatology and Dermatologic Surgery in 1988, Dr. Burgess has expanded the practice to include a wide range of dermatologic and noninvasive cosmetic procedures, and opened a second location in Annapolis, Maryland. “I still teach, and I mentor students and residents. I do Phase 3 and Phase 4 clinical trials in my office. I publish papers, and I’ve patented two procedures—filler injection techniques that I created for HIV patients who have facial wasting,” she says.

Today, her biggest challenge is finding enough time in the day to accomplish everything she wants to fit in. “My father always said, ‘You can’t store time in your pocket, so make the best use of each moment.’ I am the person who will put in 200%, but I just don’t have enough time to complete all the tasks I want to complete,” she says. “For example, I would love to do more research, but I am now at the point where I realize it’s OK to occasionally say no.”

As a high school student, Dr. Burgess had her sights set on a career in the arts. Her father, however, was less keen on the idea. “My dad was the only one of eight siblings to go on to college, on an athletic scholarship. So he was adamant about his children going to college,” she says. “He put art out of my mind. He said, ‘That is not a profession. You need something to fall back on.’ A professor once told me that I’d make a good doctor, so I applied to medical school.”

When she completed her residency in the 1980s, dermatology was quite different than it is today. Collagen fillers had only recently come onto the market. Chemical peels and dermabrasion were state-of-the-art procedures. But even then, “it fascinated me how I could improve someone’s appearance with these new techniques,” says Dr. Burgess. “I realized that with dermatology, I had the opportunity to use my art background.”

Dr. Burgess was one of the first doctors to specialize in using fillers for HIV patients with facial atrophy. “People with HIV are living 20 to 30 years on medications that cause facial wasting,” she says. “Usually these are young people who feel great, but their faces look like a skeleton. They want to look the way they feel. One patient told me it was like wearing a big ‘A’ tattoo. It bothers them a lot. Whenever I finish a procedure with an HIV patient and hand them the mirror, tears flow.”

That kind of blending of cosmetic and clinical dermatology has become one of Dr. Burgess’ top specialties. “I like the medical side of facial enhancement. You really have to know facial structure, and it requires the work of an artist,” she says. “A lot of conditions can cause disfiguration or asymmetry—lupus, Bell’s palsy, lipoatrophy. People often bring in a picture of themselves taken before they had the condition. They just want to get back to normal. It’s even more rewarding to restore people than it is to make a beautiful person more beautiful.”

“I personally train my staff because they reflect me,” she says. “And I teach my front office staff that the customer is always right.” As part of her employee orientation, she sends new hires to the nearest Nordstrom. Then she has them visit Walmart, so they can see the difference. “My office runs like Nordstrom—we offer assistance from the moment a patient walks through the front door until they leave,” she tells new staff members. “Our patients can go down the street for dermatology care, so make them want to come here. We want patients to have a great experience and feel they got their money’s worth.”

Keeping patients satisfied is especially critical because Dr. Burgess decided several years ago to stop accepting insurance. Her reason was simple: “I wanted time to talk to my patients.” Previously, she had been forced to book 60 patients a day due to low insurance reimbursement rates. “I didn’t have five minutes with each patient,” she said.

Now Dr. Burgess limits the number of patients to just 20 a day, plus two emergency slots, “so we don’t get too bogged down,” she says. “I don’t overbook. I don’t run my practice like an airline.”

She admits the decision initially caused many sleepless nights. After all, with nearly 20 dermatologists within 15 blocks of her office, she has plenty of competition. “Am I crazy?” she asked herself. “Will I have any patients?”

When asked where she acquired her business savvy, Dr. Burgess jokes that she studied in the School of Hard Knocks. “Today residents and students have access to all kinds of business models,” she says. “But back when I was fresh out of medical school, new dermatologists were on their own, flailing in the wind.”

That’s why she urges residents to sit in on a successful dermatology practice. “Don’t just hang with the doctor,” she says. “By the time you’re a third-year resident, you should know your dermatology. Instead, sit with the front office manager. Learn the business; learn how to code; see how a good practice works. That way you won’t have to recreate the wheel.”

She also cautions new dermatologists not to get caught up in the latest and greatest devices. “They are not always necessary,” says Dr. Burgess. “When I finished residency, we didn’t have a lot of technology to pick and choose from. We had surgical instruments, which in many cases achieved the same results.”

Case in point: Dr. Burgess learned needling to rejuvenate the skin. “Today, a fractional laser costs $140,000 and basically does the same thing,” she says.

So rather than rushing in and blowing the budget, she urges new doctors to start with the basics, and gradually buy devices as they develop a market. “First learn your patient population—and it may take several years to determine that,” she notes.

Patients won’t find Dr. Burgess in the insurance company’s directory of providers, so how do they make their way to her office? “It’s mostly word of mouth and the Internet,” she says.

She admits that she’s not terribly Internet savvy—“I’m in the Stone Age when it comes to that,” she laughs, “but either you join it or you lose out!”—so she hired a company to create her practice website. One of her employees is in charge of feeding information to the web team on a daily basis, adding specials, photos, news and videos from her news segments. “Regularly updating the website pushes it higher on Google search,” she says.

The practice has also created several programs to improve patient retention. They offer a Botox Club, VIP Program and host open house events. To ensure the best results and support retail sales, patients are encouraged to bring in their current homecare products. If they decide to exchange them for products recommended by Dr. Burgess and her team, the patient gets a 20% discount on the new products.

Many of the practice’s new patients come in after seeing Dr. Burgess on television. About five years ago, she was interviewed on a local TV news channel. To her own surprise, she was a natural on-camera: The viewers (and producers) appreciated the clear, easy-to-understand way she explained complex medical issues—a skill she developed through years of honing her patient communication skills.

That one brief TV appearance turned into a weekly dermatology segment. “I get a lot of patients from that,” she says. It’s one more thing to add to an already busy day, but Dr. Burgess thrives on the variety. And most importantly, “at the end of the day I can say, ‘I helped someone,’” she says.

Maryann Hammers is a freelance writer, specializing in the medical, beauty and spa industries.