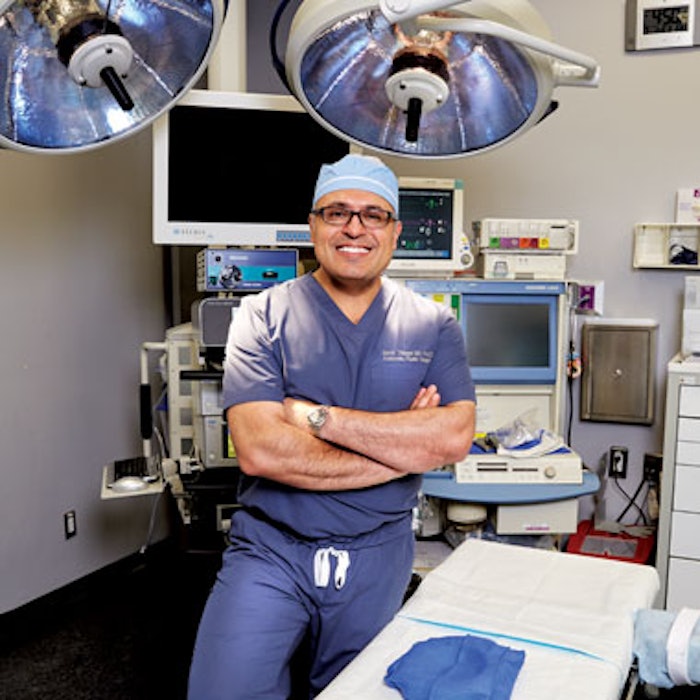 As a child, Kevin Tehrani, MD, FACS, always admired and looked up to his four physician uncles. “I thought of them as role models,” he says, adding that doctors are especially respected and revered in his native country, Iran. It seemed natural that he, too, would go into medicine. But there was a bump on the road to becoming an MD.

At age 14, Dr. Tehrani had to be smuggled out of the country during the Iran-Iraq war. Upon safely settling in New York City, he set his sights back on the goal of achieving a medical career.

He earned his medical degree at SUNY Downstate Medical Center and completed a general surgery residency at Beth Israel Medical Center. “I liked that surgery offered the ability to fix something right away,” says Dr. Tehrani. “I sought that immediate gratification.”

Initially, he was drawn to head and neck surgery; the intricacy of cardiac surgery likewise appealed to him. Then he landed upon plastic surgery, which offered both intricacy and immediate gratification. “And it’s a much happier field,” he notes.

In 2003, Dr. Tehrani opened two practices simultaneously—one in Long Island and another in Manhattan, where he lives. “I had two locations from the beginning,” he says. “Yes, I knew that it would be hard enough to start with one location, but my referral patterns led me to realize that having both locations would pay off.”

As the dual Aristocrat Plastic Surgery practices grew, the Long Island location became his primary practice, but he continues to work two days a week in Manhattan. “To grow my patient base, I relied on physician referrals initially, and later word of mouth from patients,” says Dr. Tehrani. “Though the offices are just 10 miles apart, that can be an hour or more with traffic, so they are kind of like two separate practices that each grew independently.”

He credits his success to his basic overriding philosophy, which he applies to both the clinical and managerial aspects of his practice: Never, ever settle. “I tell new doctors, ‘Don’t settle for what you learned in training. Always think outside the box and find a better solution,’” he says.

Dr. Tehrani does this by first visualizing the result he’s after, and then selecting the best method to achieve that outcome. He compares the process to architecture. “Architects don’t start by thinking of the building blocks needed to create a building, and they don’t do the same thing over and over again,” he says. “Instead, they start by envisioning the finished structure.Then they look for different ways to achieve it. I think of the beautiful result, and then I figure out how to get there.”

Though his plastic surgery practices offer both invasive and noninvasive cosmetic procedures—and are pretty evenly divided among body work, breast procedures and facelifts—Dr. Tehrani has made a name for himself with “Mommy Makeovers” in particular.

“This has become my niche,” he says. “It’s a combination procedure that deals with the trunk and breasts—both of which change when a woman’s body goes through pregnancy. It includes abdominal work and also improves the volume and shape of the breasts. It gives a lot of confidence back to the patient.”

Depending on the specific patient’s needs and preferences, the procedure might include a breast lift, implants, fat grafting and/or an abdominoplasty. And for women who request it, he incorporates other procedures, such as rhinoplasty, at the same time.

Photo by Keith Barraclough.
[pagebreak]
Dr. Tehrani also stands out in New York’s crowded plastic surgery field by performing lateral tension abdominoplasties, which he says deliver better results than traditional tummy tucks. “The muscles of the abdominal wall separate after pregnancy,” he explains. “I tighten the wall and slim the waist, with a very low scar and improved sculpturing. I also can insert saline implants through the belly button.”

Because Dr. Tehrani “aggressively tightens muscles,” patients often feel like they are wearing a tight corset for several months after the procedure. “That feeling stays with them for several months,” he says. “So they feel full quickly and they lose weight.”

Dr. Tehrani was an early adopter of noninvasive cosmetic treatments, as they were a natural fit for a plastic surgeon who believes that patients should only undergo a facelift once in their lifetime. He counsels patients in their 40s and early 50s to not have the procedure just yet, recommending that they wait until they near or pass their sixth decade.

“I think I’m unusual in that I’m likely to sway younger patients away from facelifts. Instead I suggest that they can enjoy subtle nonsurgical rejuvenation. They will look better and more natural,” says Dr. Tehrani, who offers an assortment of energy-based skin tightening and sculpting procedures, injectables and peels.

And once they have a facelift? “After that, aging gracefully is the way to proceed, as opposed to multiple overly tightened, alien-like facelifts that we all fear,” he says.

He also offers permanent injectables. “Many doctors stay away from them because they don’t make sense from a financial standpoint. But it’s important for patients to know that I’m on their side, so I give them the option.”

A year ago, Dr. Tehrani added holistic care to his practice. “It was always my goal to have complementary services in my office. I felt like this was the missing piece,” he says. “I just needed to find the right person to provide them.”

The right fit was critical, he says. “My patients trust me with everything—I am their go-to person for aesthetic needs. They confide in me. So they need to feel the same way about the person that I refer them to.”

He found the perfect fit in holistic provider Kristine Blanche, who specializes in such services as vitamin deficiencies, nutrition counseling, hormonal imbalances, and general health and well-being. A board-certified physicians assistant with an MS degree and a PhD in medical science, she runs her integrative medical practice under the same roof as Dr. Tehrani.

Blanche offers an array of lifestyle programs for patients going through menopause, seeking to lose weight or prepare for surgery, and those undergoing cancer treatment—patients that mirror the demographics of Dr. Tehrani’s plastic surgery clientele.

Photo by Keith Barraclough.
[pagebreak]
“We have a collaborative relationship—she takes care of quite a few of my patients who have diet or nutritional issues or hormonal imbalances,” says Dr. Tehrani. “She lives and breathes holistic care, and holistic services go hand in hand with what I do.”

Their partnership serves to keep patients coming back, even after their cosmetic surgery procedure is complete.

Dr. Tehrani’s “never, ever settle” philosophy continues to apply when it comes to hiring and managing staff. Selecting, training, developing and keeping quality clinical and nonclinical employees are among his top challenges, he says.

“If you don’t think someone is right for the job, it is evident early. You have to move on,” he says. “When you find the right person, you must keep them really happy. Pay them well; be nice to them. They need to know they are part of the practice, and they will stay with you a long time.”

This strategy has paid off for Dr. Tehrani. “Having the right team—people who deliver the same message and have the same high standards as I do—is my greatest source of pride,” he says. “I have very high patient satisfaction and case volume. I could never have done that on my own.”