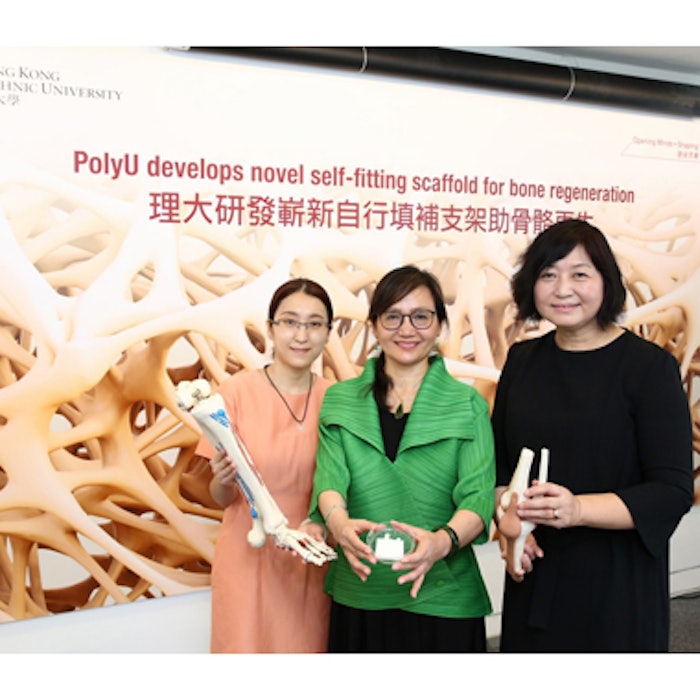 Hong Kong Polytechnic University (PolyU) announced that researchers, led by Professor Hu Jinlian (principal investigator), Dr Xie Ruiqi from the Institute of Textiles and Clothing, and Dr Guo Xia from its Department of Rehabilitation Sciences, have designed and fabricated a self-fitting bone scaffold that can be safely implanted into bone defects and induce bone regeneration. The scaffold is made of a shape memory polyurethane foam and hydroxyapatite (HA) nano-particles. The team collaborated with Sichuan University in cell culture and animal modeling for the research.

PolyU notes that the novel scaffold is characterized by its self-fitting effect. It can be compacted at 0°C, implanted with that compact shape at room temperature, and then recovered to its original shape completely at 40°C, which enhances the feasibility of using the scaffold in minimally invasive surgery.

Early studies showed the scaffold is biocompatible and has no cytotoxicity. “Our research team further examined the performance of the self-fitting scaffold in facilitating bone regeneration through a rabbit femoral defect study. The results show that our scaffold has overcome the disadvantages of traditional polymer scaffolds, and has great potential for bone regeneration,” said Professor Hu.

In the animal study, 18 rabbits with a femoral bone defect in each knee, making up a total of 36 lesions, were divided into experimental group and control group. The bone defects of the rabbits in the experimental group were implanted with self-fitting scaffolds (with original size about 5% larger than the bone defects) compacted to around 50% of their original size. After triggering with 40°C saline, the scaffolds expanded from the compacted shape to fill the defect in 60 seconds. The bone defects in the control group were left unfilled.

Image (left to right): Dr Xie Ruiqi from the Institute of Textiles and Clothing, Professor Hu Jinlian and and Dr Guo Xia from the Department of Rehabilitation Sciences.