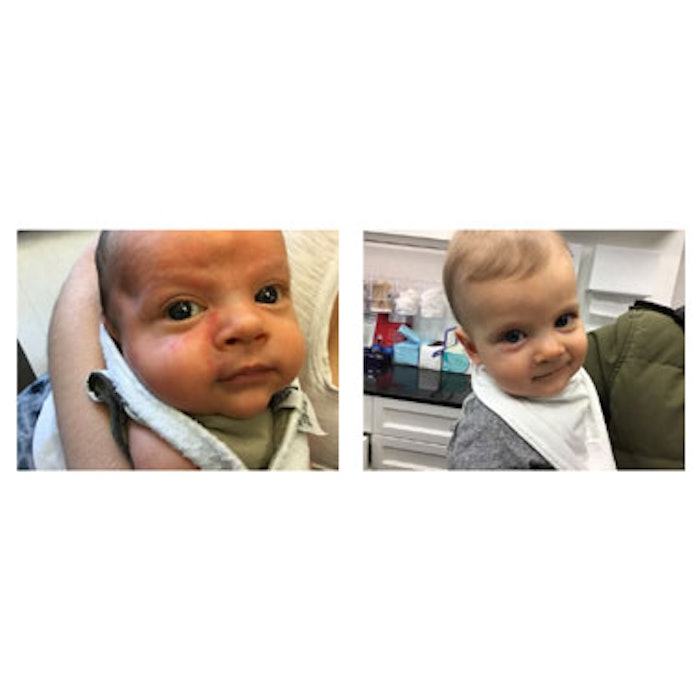 “Is it safe and effective to initiate port-wine stain laser treatments without general anesthesia in infancy?” This is the question researchers Roy G. Geronemus, MD, et al, sought to answer in their new study on the use of the Candela VBeam pulsed dye laser, which was published in the April issue of JAMA Dermatology.

After analyzing the outcomes of 197 infants with port-wine stains who underwent laser treatment during infancy (mean age at the time of first treatment was 3.38 months and the mean number of treatments was 9.8), they found that two-thirds of patents achieved greater than 75 percent clearance with no scarring or permanent pigmentary changes.

The Vbeam laser’s dynamic cooling spray allowed the physicians to treat the infants without the use of general anesthesia. “Because of the tolerability of the Vbeam laser, we are able to provide infants and children with treatment without having to put them under general anesthesia,” said Dr. Geronemus. “Treating these skin conditions early on avoids the physical and psychological impact of having a vascular birthmark on the face and body as children develop. In some cases, patients were treated within days of being born and in many cases, we saw complete or near clearance.”