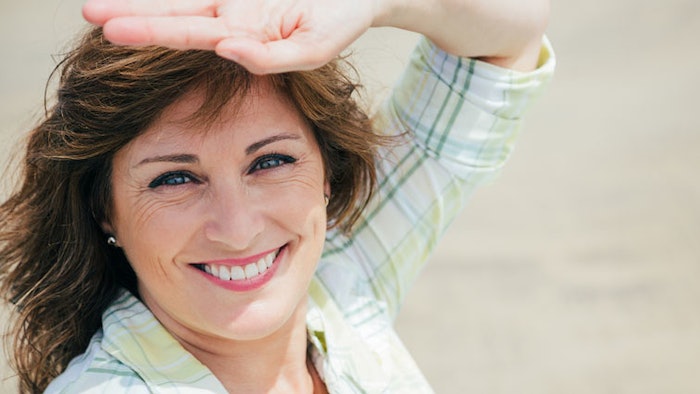 Free radicals generated during UV exposure are known to induce skin damage and aging, and decades of research has shown that excess iron can produce large amounts of free radicals. In relation, iron storage in skin has been shown to increase during menopause.

Taken together, an iron-reduction strategy could improve signs of aging, such as fine lines, wrinkles, brightness and firmness, in menopausal skin. A recent white paper by Xi Huang, Ph.D., former New York University researcher and founder of FE:I Beauty Tech, demonstrates just that. These clinical results are published in the white paper. i-On Skincare is launching March 2021, the company reports.

As Huang explained, iron is crucial to many aspects of human health and disease-prevention. And a critical part of the body’s system to regulate iron is ferritin. This protein can store up to 4,500 atoms of iron per molecule, releasing it when the body needs it.

Huang therefore sought to intervene in the early prevention of free radicals, and subsequent damage, by developing a technology to safely isolate and clear excess iron from the skin: the De-Ironizing Inducer (D.I.I.).

The second component is the clearing agent. Once the iron is released from ferritin, it can still exert harmful effects. To prevent this, a natural calcium carbonate with high buffering capacity clears the released iron. This calcium carbonate-buffered system is water-insoluble and will reportedly resist absorption into the skin as long as it is not washed away.

The dissolution of calcium carbonate releases calcium ions in the skin and carbon dioxide, leaving no trace of unneeded compounds. According to the company, the D.I.I. technology can carry as much calcium carbonate in the formulation as needed.

The company has promoted this technology as "bigger than retinol" in that it prevents free radicals from forming in the first place. In contrast, antioxidants including retinol, vitamin E, resveratrol and niacinamide are retroactive, fighting free radicals that have already formed.

As CEO, she will drive brand strategy, accelerate the development of talent, manage the company's resources and operations, and partner with its board of directors.
Jan 17th, 2023
Follow Us
Most Recent