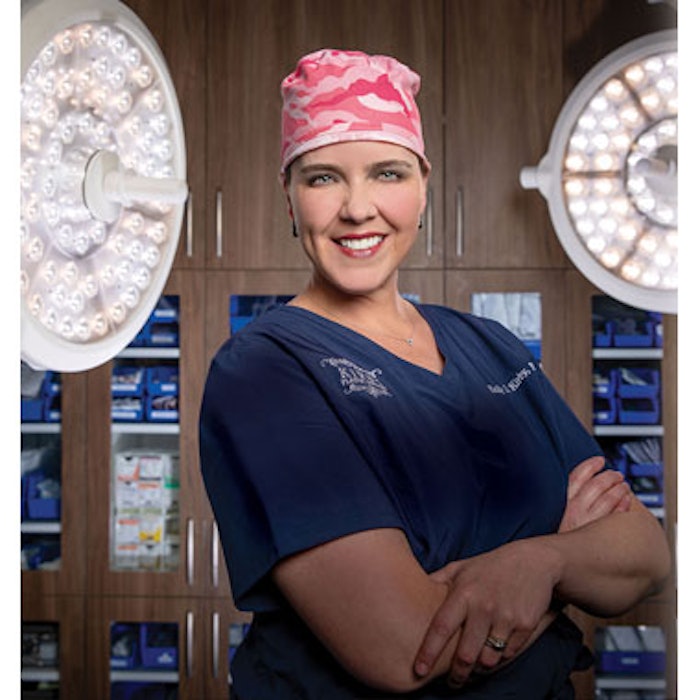 Plastic surgeon Emily Kirby, MD, was 5 years old when she first told her mother she was going to be a doctor. “She says she kept waiting for me to change my mind, but I never did,” recalls Dr. Kirby.

When a friend’s father—who was a plastic surgeon—visited her second-grade class to talk about his job, she promptly chose her specialty. “At that point, I wanted to be an artist, a doctor or a race car driver, but when he showed us pictures of cleft lips and palates, I was floored,” she says. “I went home and told my parents that I could be an artist and a doctor, and that my mind was made up. I was going to be a plastic surgeon.”

Today, Dr. Kirby is the owner and founder of Kirby Plastic Surgery in Fort Worth, Texas, chief of plastic surgery at Harris Methodist Hospital and she works part-time at Cook Children’s Medical Center where she performs pediatric craniofacial surgeries. The private practice she launched in 2011 recently underwent a major expansion to include an onsite operating room and medical spa.

After graduating from Vanderbilt University and earning her medical degree at Texas A&M University College of Medicine, Dr. Kirby set her sights on a plastic surgery residency at the University of Kentucky. “It’s a high-volume, Level 1 trauma center. The residents there are very much hands-on, which was similar to my experience in medical school, so I wanted to go there,” she says. “However, the year I was supposed to match, they didn’t take anybody.”

So, she spent a year doing a general surgery residency in Denver as she waited for an opening. During that time, she stayed in touch with Henry Vasconez, MD, the head of the plastic surgery program at the University of Kentucky and joined his team on a medical mission trip in Ecuador. “I got to know them very well. As soon as a spot came open, they called me, and I transferred over,” she says.

Medical mission trips were and remain an important part of Dr. Kirby’s career. During her first year of medical school, she went on a medical mission to Mexico with several classmates. “Not only do you see the delight on people’s faces—how much they appreciate you and how you changed their lives—it’s a great experience of getting back to the basics of medicine,” she says. “You’re looking at X-rays by holding them up to the light and having to interpret things without a CT scanner, an MRI or an ultrasound. You have to polish your physical exam skills and get a really good history. I made a decision that this is something I want to do regularly, and I feel everybody should do this at some point in their training.”

During her time with Dr. Morales, she worked with him on pediatric craniofacial surgeries as well as cosmetic cases, all while learning about the managerial responsibilities of practice ownership.

After completing her fellowship with Dr. Morales in 2011, Dr. Kirby, who grew up in Iowa, moved to Fort Worth, Texas, to launch Kirby Plastic Surgery. “My sister went to Texas Christian University, so I spent quite a bit of time in Fort Worth even before I applied to Texas A&M,” she says. “She and her husband had a baby while I was in medical school, so I babysat a lot. Texas is the only other place [besides Iowa] that feels like home to me, so I knew I’d be back, ideally in Fort Worth.”
During her time at Texas A&M, Dr. Kirby also began dating her future husband, Randol, a Texan. “One of the things he asked me early in our relationship was, ‘How do you feel about Texas?’” she says. “I had a feeling it might be a relationship-ending question, so I told him I planned on moving back to Texas at some point and living there. He said, ‘OK. Good. We can keep dating.’”

Her husband earned an MBA while at Texas A&M, and he is heavily involved in the business side of Dr. Kirby’s medical practice. “We’ve really done this as a joint venture,” says Dr. Kirby. “His experience is in business. Mine is in medicine. So we’ve both had a lot of learning to do. When we were setting up the business plan, it seemed like every item we checked off the list would generate 10 more. It was a matter of diving in and figuring out how to do it, talking to people and asking advice. Just plowing forward.”

In the early days of the practice, she would take as many as 10 trauma cases at the hospital each month. “It was a way to get started,” she says. “Not only are you getting paid but you can also generate a few patients. I treated one pediatric patient, and three of her family members came to me later for cosmetic procedures.”

Dr. Kirby also traveled around town introducing herself to the other doctors. “I actually called all the plastic surgeons in Fort Worth before I came to town just to introduce myself, tell them I was coming and ask for words of wisdom,” she says. “They were very friendly, which you don’t find everywhere. This has been a great community to practice in.”

Thanks to physician referrals and word of mouth, her practice began to grow. “I realized we were going to be OK when I started to see patients on the schedule who I didn’t recognize and I didn’t know where they had come from,” she says.

The practice did so well, she soon ran out of space for her staff. “We outgrew our old office probably three years before we actually moved,” she says. “We kept needing more personnel but we had nowhere to put them. I ended up sharing my office with my PA, and we converted a closet into an office. We doubled up the offices and put a standing desk in the hallway. We stuck people wherever we could and just kept growing.”

About two years ago, an opportunity to move into a new high-end shopping center arose, and Dr. Kirby seized it. “It’s a great new center called The Shops at Clearfork that’s anchored by Neiman Marcus,” she says.

The new facility allows her to offer a full range of aesthetic procedures through Kirby Plastic Surgery and Kalos Medical Spa at Kirby Plastic Surgery. “It’s about offering the right combination of services. For example, if I’m looking at somebody’s neck, I can offer them a noninvasive option, such as Kybella or CoolSculpting, and I can also do liposuction or a neck lift,” she says. “We have all those tools in our bag of tricks. It’s nice to be able to talk with patients and offer them a variety of both what they’re looking for and what they need.”

Dr. Kirby named her medical spa Kalos because it reflects her philosophy as a cosmetic physician. “It’s a Greek word that means ‘the pinnacle of beauty’ or ‘beauty inside and out.’ When we learned about it, we knew it was the right name for our medical spa,” she says. “What motivates me is seeing the smiles on people’s faces and their confidence. When people feel good about themselves, they shine with the inner beauty they always had, but that they now feel like they can share with others. It’s such a touching situation to have with any patient, whether they’ve had a surgery or just a little facial treatment that makes them feel so good about themselves that now they see and feel the beauty they always had.”

The new facility also allowed her to achieve the next step in her career—having her own OR. “When my husband and I were doing the business plan we called it ‘the plan to take over the world,’ because we had different stages that we wanted to accomplish,” she says. “First, it was sustaining myself and keeping patients coming in the door. Then, as we grew, we would hire an esthetician so we could provide skincare services. Then we wanted our own OR, and we just accomplished that. The next phase would be to own a building with multiple ORs that we can rent out to other surgeons.”

Over the course of her career, Dr. Kirby has received support from colleagues and patients. “I met some outstanding people along the way as well as some who were discouraging,” she says. “In my ambitious youth, I used all of the discouraging words as a positive and said, ‘Just try to tell me I can’t do it.’ And I kept moving forward.”

The best advice she received came from a fellow female surgeon. “She said, ‘As a woman, you can never be 100 percent mom, 100 percent daughter, 100 percent sister, 100 percent friend. Something has to give, and every day that may change—where it gives—but you can make it work,’” says Dr. Kirby. “I always remember that advice as I take on new projects. I’m married and I have two children. People always ask me, ‘How do you do everything?’ Things give here and there.”

Likewise, Dr. Kirby encourages new physicians to not let fear deter them from their goals. “A lot of residents are scared to go out on their own right away,” she says. “When I was getting closer to being chief resident, the former chief said, ‘You can do it. There’s no doubt you can do it. You just have to jump right in and learn as you go.’ That was really helpful, because you definitely have that doubt throughout your career. I didn’t know how to start a business, but I told myself: You’ve got the critical skills. You’ve got the clinical education. You know how to treat patients. The rest falls into place.”

She credits the plan she and her husband developed eight years ago with allowing her to achieve her goals. “One thing that really helped us was having a good idea of where we wanted to go,” she says. “It wasn’t a very specific business plan, but we did have a specific view of what we wanted to accomplish long term, and we keep that in mind each day.”