In a review of five-year data on patients treated with CCH for clinical concerns antibodies were detected but appeared to have no effect on efficacy or adverse events. 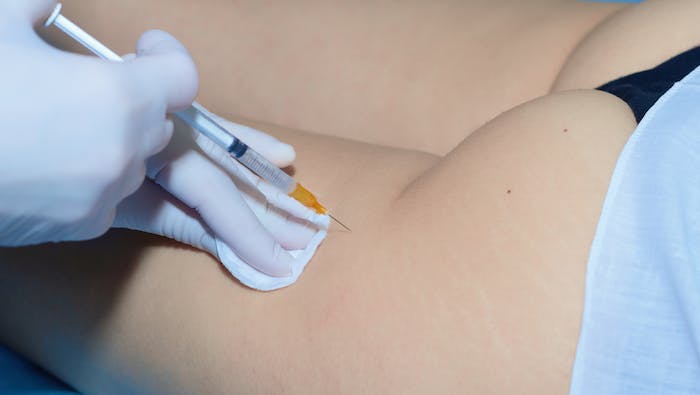 Clostridium collagenase histolyticum (CCH) was recently approved by the U.S. Food and Drug Administration (FDA) for the treatment of cellulite. Following approval, the results of preclinical safety and human pharmacokinetics (PK) studies were published in the September issue of the Journal of Drugs in Dermatology supporting the long-term safety of CCH in both human and animals following even 43X the approved dosage.

Ashish C. Bhatia, MD, et al, reported data from three PK studies that included a total of 41 women treated with 12 subcutaneous injections of CCH per thigh/buttock in one session (up to 3.36 mg/dose). CCH for injection is composed of two purified bacterial collagenases (AUX-I and AUX-II [clostridial class I and II collagenases]). The researchers took blood samples at baseline, five, 10, 20 and 30 minutes post-treatment; and again at one, two, four, eight, 12, 24, 48, 168 and 504 hours post-dose to identify anti-AUX I and anti-AUX II antibodies and also recorded adverse events.

In another preclinical study, rats received 0, 0.029, 0.13 or 0.29 mg/dose of CCH intravenously (IV) every other day (QOD) for 16 days (total, 8 doses) and were evaluated for histopathologic changes. The top dosage the rats received was ≥43× the proposed human therapeutic dose on a mg/kg basis.

In the human PK studies, no quantifiable plasma concentrations of AUX-I or AUX-II were observed post-dose. Adverse events included injection site bruising (97.6%), pain (87.8%) and edema/swelling (46.3%). Antidrug antibodies were seen in most women at 504 hours post-dose.

In rats, plasma concentrations of AUX-I and AUX-II (CCH components) were measurable for 30 minutes and 1 to 2 hours, respectively, after IV administration. At ≥43× proposed human therapeutic dose on a mg/kg basis, rats experienced elevated liver enzyme levels, increased liver weights, and histologic changes that were mostly reversed during a 14-day recovery period.

When reviewing five-year data of people who underwent CCH injections for Dupuytren contracture (DC) with palpable cord or Peyronie’s disease (PD), they found that >90% of patients treated with CCH for DC and PD were seropositive for anti-AUX I and anti-AUX-II antibodies. However, the presence of neutralizing antibodies in patients with PD or DC had no apparent effect on the clinical response or the frequency of adverse reactions.