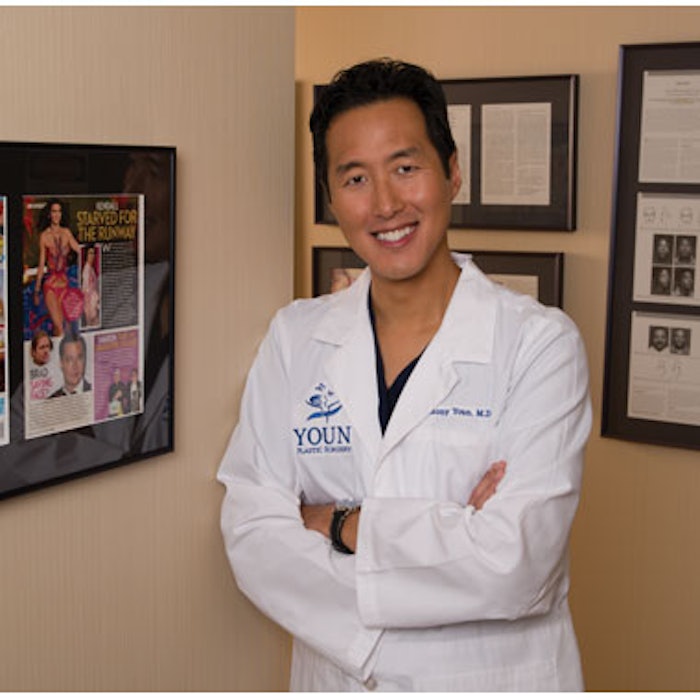 “Becoming a doctor was expected of me as an Asian-American kid growing up with a physician as a father,” says Anthony Youn, MD, founder of Youn Plastic Surgery in Metro Detroit, Michigan, and author of In Stitches and The Age Fix: A Leading Plastic Surgeon Reveals How To Really Look Ten Years Younger. “I grew up with traditional Korean parents, and I had this vague notion that I wanted to help people, so being a doctor sounded like a reasonable path.”

Dr. Youn attended the Michigan State University College of Human Medicine unsure of which field he wanted to pursue. His father, an OB/GYN, hoped he would become a transplant surgeon, cardiac surgeon, neurosurgeon or vascular surgeon, but the younger Youn wasn’t sure these high-powered, high-stress specialties fit his upbeat personality.

Based on his early interest in art, he decided that he would prefer a specialty that allowed him to work with his hands. He initially focused on general surgery, but soon discovered that it wasn’t his calling. “I wasn’t interested in trauma or life-or-death operations, so I started working with plastic surgeons and quickly became obsessed with the field—both reconstructive and cosmetic surgery,” he says.

Plastic surgery was a career path that neither he nor his parents really knew much about. It was the mid-1990s, and plastic surgery had yet to explode into the public consciousness. “They were a little skeptical, but now they love it,” says Dr. Youn. “This field of medicine has allowed me to do so much more than just take care of patients.”

Dr. Youn joined the Grand Rapids MERC Plastic Surgery Residency Program, a highly regarded program where all the residents are placed in a private practice. “After finishing residency I was fortunate enough to get a fellowship in cosmetic plastic surgery with Dr. Richard Ellenbogen in Beverly Hills, California,” he says. “He was doing so many things I hadn’t seen before, and I really fell in love with the cosmetic side of the field. The variety of patients coming through the door was fascinating, and I felt I had finally found my calling with aesthetic plastic surgery.”

As he was approaching the final month of his one-year fellowship, a new reality show called Dr. 90210 began filming in the office. “It seemed like an interesting project, but I didn’t know exactly what it would be,” says Dr. Youn. “They followed us to social events and even filmed my going away party.”

Dr. Youn had the option of staying in Beverly Hills with Dr. Ellenbogen’s practice or moving back to Michigan, and although he loved the atmosphere of L.A., it just didn’t seem like the perfect fit. “I felt the need to give back by taking care of reconstructive patients; I also wanted to raise my children in Michigan,” he says. “So I turned down the offer and moved back to the Midwest to start my own plastic surgery practice.”

Once home in Michigan, Dr. Youn took out a loan for $150,000 and moved to Rochester, a Detroit suburb, to open up his practice. The problem was, no one knew him.

“I had no patients, no money and a ton of debt, but I had this drive to succeed,” he says. “I did everything I could to get my practice going. I gave talks to dozens of organizations. I handed my business card to a different person every single day, and I tried to encourage my in-laws and anyone I knew to refer their friends to me. It was a struggle.”

Photo by Santa Fabio.
[pagebreak]
With money being so short, Dr. Youn applied to urgent care centers but they all turned him down, saying he was overqualified. He admits that things got “real scary,” but then Hollywood came calling once again.

“The producers of Dr. 90210 called to give me a heads-up that I was going to be on the show and would be in the third episode of the season,” he says. “I Googled ‘How to write a press release,’ wrote one up and sent it to everyone in town, and waited for my big debut. I had visions of a recurring role, as they took hours of footage both inside and outside the operating room. I hoped that this was just the beginning of my TV stardom.”

The night of the airing, Dr. Youn, his wife and their dog watched from their apartment. He appeared on-screen for two-and-a-half minutes and was then gone from the show. Permanently.

As the credits rolled, his disappointment was at an all-time high. However, prior to Dr. Youn’s exit from the show, Dr. Ellenbogen said, “I made him an offer he couldn’t refuse, and he refused it. Now he’s leaving to go start a practice in Rochester, Michigan.” The next day Dr. Youn’s phone started to ring, and the practice exploded.

One of those calls was from a local radio talk show that aired right after the popular Howard Stern Show. They had received Dr. Youn’s press release and invited him to come on air the next day to talk about plastic surgery.

The Power of Media

The response to his brief television appearance taught Dr. Youn an important lesson about the power of the media. “The endless repeats of Dr. 90210 and my local interviews powered my practice for the first two years,” he says. “Even a dozen years later I still have people telling me they saw me on the show. It’s amazing what 150 seconds can do for a career.”

Shortly after the show aired, he spoke with an old friend who was finding success writing a pop culture blog. The blog became so popular and lucrative that his friend was able to quit teaching and write full time. This led Dr. Youn to start his own blog, Celebrity Cosmetic Surgery. Within a few months, he had millions of visitors coming to the site. That success then led to television appearances on The Rachael Ray Show, The Doctors, Good Morning America and many others.

Dr. Youn also found success in the publishing world, co-writing In Stitches, a memoir about his years in medical school. “I had read a lot of memoirs about medical school and I felt like none of them told the true story; they were overly pious,” he says. “I wanted to reveal the truth about what becoming a doctor is really like. When you’re in medical school, you’re basically a glorified undergraduate. All of a sudden people assume you are a noble physician, but that’s not often the case. It’s a journey that is more baby steps than immediate transformation. I wanted to write a modern equivalent of The House of God.”

His second book, The Age Fix came out this past April, reached No. 8 on Amazon’s best-seller list, and has become a top seller. It details how people can look 10 years younger without undergoing plastic surgery. It’s a topic he repeats on a public television special of the same name, which runs nationally during pledge drives. Thanks to his books and other media appearances, Dr. Youn’s waiting list currently sits at 14 months.

To whittle down that waiting list, Dr. Youn brought in his med-school friend and fellow board certified plastic surgeon, Danielle DeLuca-Pytell, MD, to join him at Youn Plastic Surgery in 2013. The practice now employs nine people, including two estheticians, a physicians assistant and a nurse.

The 5,000-square-foot facility has a “contemporary, but laid-back décor,” says Dr. Youn. “The unique characteristic is that it’s a friendly practice. From the beginning, I set the stage for how I wanted my practice to be and the personality I wanted it to have. I always want my employees to know their quality of life is important to me. Everyone gets Friday afternoons and weekends off. I have never yelled at an employee in a dozen years, although I have fired some—I’m not a pushover. I trust my team, so they have quite a bit of autonomy.”

In addition to the surgical practice, the office features a skincare center with seven technology-based devices, allowing for everything from skin analysis to laser treatments. Services include breast, body and face procedures, as well as injectables, lasers and peels.

While the media played a large role in Dr. Youn’s success, he warns that you can’t just assume you’ll become famous on TV or social media right out of residency.

“People look at me or my friends, including Dr. Michael Salzhauer (aka Dr. Miami), Dr. Steven Svehlak from Dr. 90210 and Dr. Andrew Ordon from The Doctors, and they want to be us right away, but I didn’t become who I am overnight,” he says. “It’s important to get good training. You have to become a good physician and take care of your patients first, and everything else will come after that.”

His advice is to set up a proper infrastructure, take care of patients in the best possible way, and then figure out what you excel at and focus on it.

“For me, I love media: I enjoy writing and TV, and this has influenced my practice and business immensely,” says Dr. Youn. “However, success as a plastic surgeon always starts with being a good physician. Don’t focus on TV or media initially, because if you don’t take good care of your patients it doesn’t matter how much coverage you get; word will get out.”

Dr. Youn is currently researching and writing his fourth book (the third one, a follow-up to In Stitches, is being shopped by his literary agent to various publishers), and there are some potential TV shows in the works as well. For now, he’s spending part of the summer traveling to promote his public television special.

“I regularly write articles for cnn.com, Huffington Post and mindbodygreen.com, but I’m also considering some other possible media opportunities,” he says. “My favorite media are radio and TV, so these are where my focus currently lies.”

But Dr. Youn’s life isn’t all about aesthetics. “For fun, I spend a lot of time with my kids; I coach them in baseball and basketball, and my family does a lot of traveling,” he says. “I really enjoy what I do, especially helping people feel better about themselves. This is the career I always wanted.”