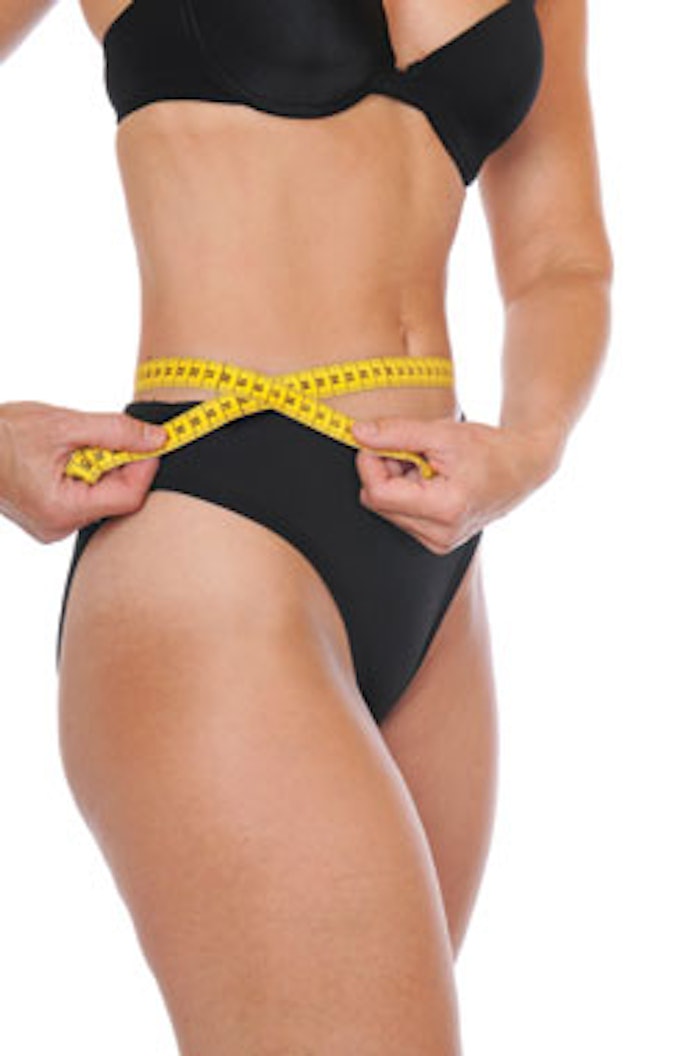 Throughout history, people have sought the perfect cure for losing fat. They’ve tried fad diets, popped appetite suppressants, explored every kind of exercise program and, when all else failed, resorted to liposuction and plastic surgery.

But today, noninvasive body contouring devices are piquing the public’s interest as safe and affordable means to eliminate those last few stubborn inches. Consider the change in the number of liposuction procedures since 2000—from 354,015 to 202,128, according to the American Society of Plastic Surgeons (ASPS). In contrast, the new noninvasive treatments—ranging from laser-based and radiofrequency devices to high-intensity focused ultrasound and cryolipolysis—are the talk of consumer beauty magazines and websites.
© Thinkstock
[PAGEBREAK]
The marketing messages are consistent, but the technologies behind these device vary widely. Following is a review of the most popular fat reduction devices now on the market and the mechanisms of action behind them.

In the 1960s, a pediatrician noticed that kids who were put to sleep with popsicles in their mouths were losing fat in their cheeks as a result of cold panniculitis, an inflammation of the subcutaneous adipose tissue that occurs with cold exposure and results in fat loss. Ten years later, another group of researchers observed that long-distance equestrians who rode at least two hours a day in the winter were losing fat on the outside of their thighs, while the inner thighs, warmed by the saddle, remained unchanged.

A team of Harvard researchers put the two findings together and theorized that a very specific cold temperature might just kill fat without having a negative impact on the rest of the body. Their concept relied on the premise that fat is more sensitive to cold than the surrounding muscle, tissue and skin.

The research team first tested their theory on pigs in a study published in Lasers in Surgery and Medicine (November 2008). In a followup study, ultrasound assessments revealed a 33% reduction in superficial fat layer thickness with no significant changes to the animals’ lipid counts.

Following the animal studies, Zeltiq Aesthetics (zeltiq.com) introduced its cryolipolysis device for humans known as CoolSculpting, which features a cup-shaped applicator and a moderate vacuum to draw tissue between two cooling panels. A multicenter, nonrandomized clinical study was initiated to evaluate the effects of cryolipolysis on fat layer reduction of the flanks and back in humans. Results demonstrated an average reduction of 22.4% in the thickness of the subcutaneous fat layer, with the best results occurring in those patients with modest fat bulges as opposed to obese patients or individuals with excess skin laxity.

The exact mechanism of action is unknown, but the prevailing theory is that a specific proprietary temperature causes apoptosis of the adipocytes followed by an inflammatory response, which results in the ruptured adipocyte cells being digested and eliminated from the body over the next 90 days.

In his own medical spa, Grant Stevens, MD, FACS, a board certified plastic surgeon and medical director of The Stevens Institute, Marina del Rey, California, (thestevensinstitute.com) has observed an average 25%-30% reduction in fat in those areas treated by the Zeltiq CoolSculpting applicator. He describes the immediate aftereffect on the skin as looking like “the world’s biggest hickey.”

“It gets really cold and then an hour later, the fat looks like a cube of butter,” he says. The treated area is then massaged flat, and the numbing and redness quickly dissipate. Side effects include temporary erythema, bruising and numbness at the treatment site.

As with most of these noninvasive therapies, the most effective area for the cryolipolysis treatment is the abdomen and flanks, or “love handles.” Dr. Stevens has observed an average loss of two inches and even up to four inches in one male patient.

The fat loss is gradual—over a three-month period—and is best indicated for patients with modest fat bulges versus obese individuals. “This is really for contouring the body,” says Dr. Stevens. “It should not be used as a primary means of losing weight.”
[PAGEBREAK]

For years, physicians have been using low-intensity ultrasound as a diagnostic tool to gain insight into the body’s internal functions. More recently, researchers have discovered that high-intensity focused ultrasound creates pressure waves that can have an impact on objects in their path—like fat.

Using a broad to narrow funnel of pressured, focused energy, the technician can create a focal zone of heating in the fat layer. The result is twofold: destruction of targeted fat cells and contraction/thickening of subcutaneous collagen.

“By funneling the energy to a certain focal zone, the ultrasound kills whatever fat cells are there. Then, over several months, the body naturally recognizes the fat as something foreign and clears it as debris. This is a permanent, noninvasive way to eliminate fat cells,” says Michael S. Kaminer, MD, managing partner of SkinCare Physicians, Chestnut Hill, Massachusetts.

Dr. Kaminer, who uses Solta Medical’s Liposonix (solta.com), has observed an average loss of 1 inch in one treatment, with best results occurring around the abdomen and love handles. Clinical studies back up his findings. An October 2010 study published in the Aesthetic Surgery Journal found that the Liposonix treatment decreased the waist circumference in 85 men and women by an average of 4.6cm after three months. The treatments lasted 60 to 90 minutes using a mean energy level of 134.8 J/cm2.

In a separate Aesthetic Surgery Journal report (May 2011), the application of the high-intensity focused ultrasound energy appeared to provide a safe and effective means for ablating fat with no clinically significant changes to serum liver function, free fatty acids or cholesterol levels.

While some of Dr. Kaminer’s patients say the treatment gives them little discomfort, others may feel some pain, cold, prickling, tingling or warmth. Much depends on the energy settings, which can range from 30J/cm2 to 60 J/cm2. The goal, Dr. Kaminer says, is to achieve a total of 140J/cm2-150 J/cm2, which can be also achieved with five passes using 30 J/cm2 or four passes using 40 J/cm2 in a single treatment session.

In the late 1990s, mechanized and suction roller devices attracted lots of attention for softening the look and feel of cellulite. While many of these devices help increase circulation and decrease trapped interstitial fluid, they do little to separate the tight fibrous septa that connects the superficial fascia to the dermis, a main factor leading to cellulite’s dimpled effect.

The emergence of laser therapy changed all that with combination ablative and non-ablative laser-based devices that heat up the fibrous septa and cut the septa tether with an ablative wavelength using a high-peak energy pulse at a lower frequency, while a lower energy, higher-frequency nonablative laser tightens and synthesizes collagen.

Marc Salzman, MD, FACS, a board-certified plastic surgeon and director of the Salzman Institute of Cosmetic Surgery, Louisville, Kentucky (itbecomesyou.com), says he can improve the appearance of cellulite between 30% and 70% with a 50% average using his minimally invasive
[PAGEBREAK]

Sciton CelluSmooth (sciton.com). While other devices focus on fat reduction, this laser-based device smooths the bumps in places like the saddlebags that often can be hard to target with fat reduction applicators.

According to Dr. Salzman, CelluSmooth requires a 30-minute session using a local anesthetic fluid to control discomfort. “Most patients experience about one week of bruising and swelling and cannot exercise for a week,” he says. Full results manifest about eight to 12 weeks following treatment.

Just as cryolipolysis uses cold temperatures to freeze fat, radiofrequency uses heat (46°C-49°C) to kill fat cells or at least increase their metabolism, causing the breakdown of the fat from the cells, says Karol Gutowski, MD, FACS, a board certified plastic surgeon with MAE Plastic Surgery in Northbrook, Illinois (maeplasticsurgery.com). An added benefit of radiofrequency-based devices is that the heat can also tighten skin and stimulate the fibroblast cells that make collagen, Dr. Gutowski notes.

Like nonablative lasers and ultrasound, radiofrequency delivered at specific wavelengths generates heat in the adipose tissue, which can either stimulate metabolism to release fat and shrink the cell or induce cell apoptosis. Devices with adjustable wavelengths can help the technician determine a specific depth according to where the fat sits on any particular area of the body, says Dr. Gutowski. The Reaction device by Viora (viorareaction.com), for instance, has four settings to determine depth and function.

“If you’re tightening collagen, you want to get into the dermis. If you want to target fat, you need to target the subcutaneous fat layer,” says Dr. Gutowski. Typically, that target is no more than 1cm to 2cm deep.

At Israel’s Keren-Or Medical Aesthetic Center, researchers tested the Reaction for skin tightening and wrinkle reduction on 16 healthy female patients. The subjects underwent three treatment sessions at three-week intervals with results showing moderate to significant improvement in 81% of the patients.

“You won’t see results right away. There’s initial tightening, but you have to wait for the collagen to synthesize. Final results are typically seen up to six months,” says Dr. Gutowski, who adds that
[PAGEBREAK]
long-term results are not yet well published so repeat treatments may be needed.

Not only does radiofrequency help with fat reduction; it’s also proven to help treat cellulite. A 2012 study published in the Journal of the European Academy of Dermatology and Venereology found that classical and high frequency RF reduced cellulite in nearly 90% of the 28 women who received the treatment. Post-treatment observations included a decrease in the thickness of the dermis and subcutaneous tissue, an increase in collagen fibers, decreased subcutaneous tissue growing into bands in the dermis and reduction of edema. No significant changes occurred in the placebo group.

Noninvasive body contouring treatments typically take about an hour to administer, though session duration can be longer for the patient who wants to treat multiple areas. While you could treat one patient’s love handles, abdomen and thighs for four hours, some physicians will double up with technicians using multiple machines to speed up the session.

It’s important that patients understand that none of these noninvasive and minimally invasive fat reduction and cellulite-smoothing devices replace maintenance diet and exercise, nor will they produce the dramatic results of liposuction or surgery. “It is not a facelift or a tummy tuck. You are not going to get surgery results. You have to have realistic expectations,” says Dr. Gutowski.

Andrea Sercu is a skincare writer located in the San Francisco Bay Area. Contact her at asercu@gmail.com.